Creating sequence: I have reproduced this situation many times. Most of the involves some combination of click on purple gems → cast ultimate and other spells quickly before the purple gem info disappears. I cannot trigger this stably. It may have something to do with timing. 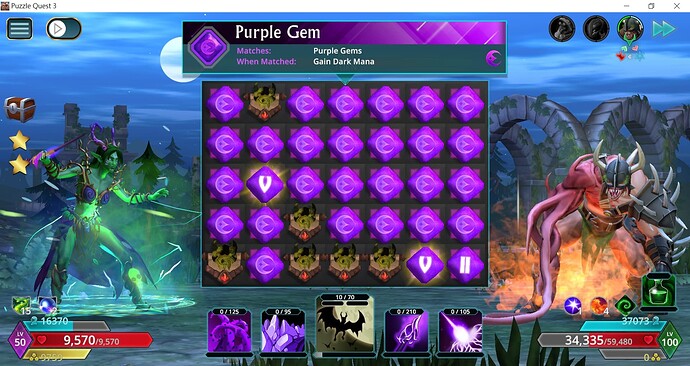 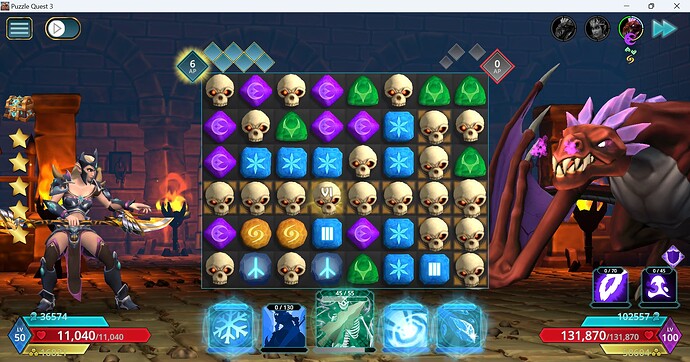 I have the same problem in the AP mode, but on necro gems instead of imp gems. Clicking on these necro gems at the bottom shows that they are skull gems… 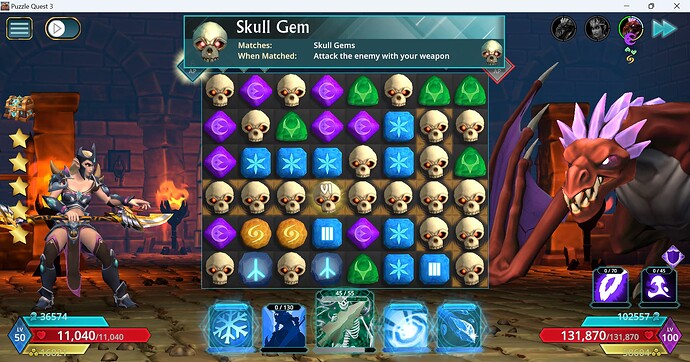 In fact, I believe that I have the same problem very frequently in the time mode, but most of the happen after I make matches (and timer started running), so I never had enough time to make sure that it is a bug.

Just double checking, is it that the Death Gems cannot be interacted with, or is it that when they are selected before smashing them they are displayed as Skull Gems?
Or both!?

Also in your second screenshot, do you have a Skull selected?

i have a video of this happening with Merc:

I noticed this happening with my necro and my merc. At first I thought it was happening if I made a match before activating the gem. But I’ve tested that out and if I make a gem match first, sometimes the ultimate gem works, sometimes it doesn’t. Then I thought it was a combo of matching and casting a spell before activating the gem, that was triggering it. Nope. Hit and miss there, too.

One thing I did notice when doing a bunch of battles in a row… About 10% of the time I have been able to get the gem to activate by clicking it several times, making another move, then clicking the gem again. And yes, that is exactly as ridiculous as it sounds. haha I think it probably is more about the making another move than the extra clicks. But who knows, at this point.

I think it probably is more about the making another move than the extra clicks.

Yeah, I noticed that it is usually enough to drag a normal gem a little (without making a match) to be able to click the ultimate gems again. For me it works best in AP Mode.

I’ve been trying this (just partially moving a gem or dragging a gem that won’t match) and so far it has worked every time, to “wake-up” the malfunctioning ultimate gems. Thanks!

this also works for the greed gems on merc because sometimes they are unclickable too. just slightly move them and then you can bust them.

Hey just letting you know that this is still on the radar and we’re still investigating the issue. If we got any new news we’ll let you know