Good morning (or afternoon or evening depending on your part of the world!)

The September Community Update is out. You can read it below or in it’s original format
https://puzzlequest3.com/september-community-update/

Summer has changed into Autumn and welcomes in September’s community update!

We started this community blog as a chance for our player community to see a small part of what we’re working on here at Infinity Plus Two! We want to focus on what we’re actively working on behind the scenes and how we’re making changes based on your feedback. We’re shifting our blog releases to mid-month to avoid colliding with Patch Notes releases. 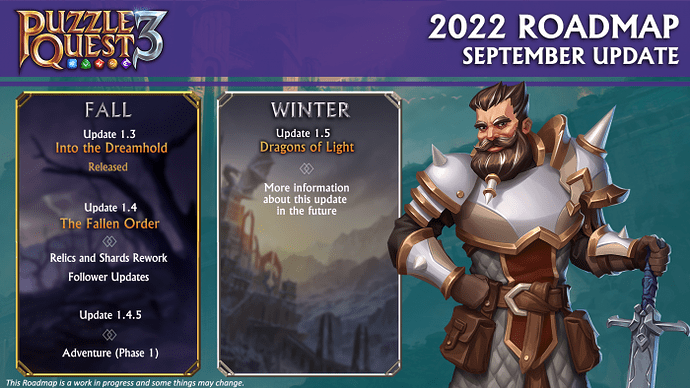 700×394 339 KB
Please note that this roadmap is a work-in-progress and things may change or shift!

Yup! It’s a big one this time around!

We planned for some pretty big changes in 1.4 (Relics and Shards Updates, Follower Updates (part 1) and Adventure). Since these were all quite chunky features, we’re bringing you the Relics and Shards Changes and the (highly anticipated) Follower Updates with 1.4 on October 19th at 5pm PST [October 20th at 1AM UTC] and we’ll be introducing you to our brand new game mode “Adventure” just a few weeks later in mid-November!

For now, let’s take a quick look at some of the features coming to you in 1.4!

First up, Relics and Shards Changes. 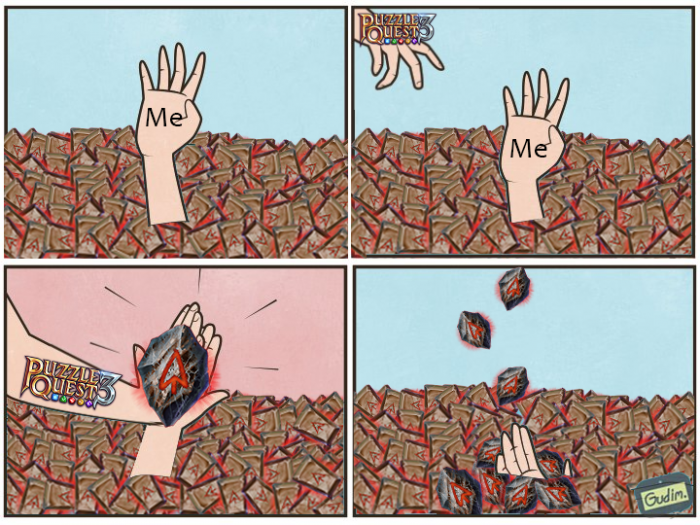 700×525 546 KB
For a start, the Relics are getting a little name change so you know exactly which ones belong to which set without needing an encyclopedic knowledge of where you found things. We’re also smoothing Relics and Shards out in a much more fundamental way too which should make it much simpler and easier to upgrade what you need without carrying around a whole dragon’s horde of stuff in your wallet!

We mentioned that we wanted to break the Follower Updates down into chunks (and BOY are we glad we did after we did the design and construction for this fellas). This first chunk is trying to address a problem that a lot of the Followers have – “Why am I upgrading?”

For some, this is easy. Others are a little less flashy. So we’re adding some sparkle, pizzazz and (bringing us to the second part of these Follower Updates) some features you folks have been asking for for a while…

What’s that? In the distance… Do we hear… Re-Rolls…?

Darkhunter will allow you to choose whether he crafts a Rune or a Scroll and at higher levels you can choose the element!

And while October 19th is just around the corner, here’s a sneak peek at one of the Skeletal surprises coming in Spooktober 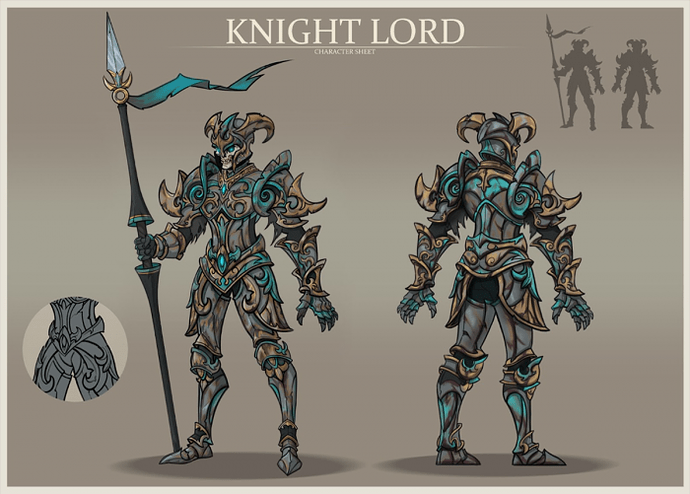 This month we read a lot of your feedback (and we do mean a lot) !

From the inventory UI, follower updates, inventory space, and difficulty with upgrading, we’ve read it and have started making some changes.

We were able to roll out a couple of Quality of Life items pretty quickly this month:

And, of course, there are still more changes to come. So here are some upcoming changes we will be rolling out after considering some of your feedback:

Here’s a peek at what we’re working on! 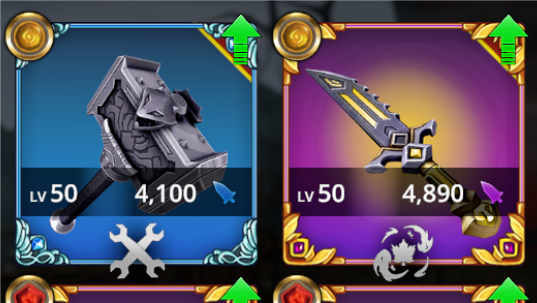 Please note this is an early look and may not represent the final changes.

That’s it for the September Update, see you in mid October!

Darkhunter will allow you to choose whether he crafts a Rune or a Scroll and at higher levels you can choose the element!

I think this is definitely one of the best changes (albeit without the full details) that could come to this game, period. The inability to tailor mastery of gear or to find epic level runes just to get mid-level gear upgrades has really killed new player interest in the game. I get that finding the resources necessary to upgrade your gear to mythic is going to be a huge grind. Having to farm for days or even a week or more to find the right color resources needed to evolve your ring to level 26 is just ridiculous.

I’m very happy to see this change and looking forward to seeing how it is fully implemented.

Sibellos is right on the money with this observation. I’ve stayed quiet for awhile and have silently observed the state of the game.

I’ve watched the frustration vented in general chat by many players.

I’ve watched multiple players join the the guild I am in, become frustrated because it is too hard to build a basic gear set and participate in the daily kingdom defense, and then quit the game in frustration.

These changes are so badly needed for the long-term health of the game. Also looking forward to these needed changes (even if they cost Gems for a re-roll)).

YAY! But please fix kingdom defense. Also more more more and also more inventory. Kingdoms should be collaborative, not intra-competitive. Inventory at max should fit at least one of every item in every color. I have all these wonderful heroes I never use because I can’t spare the space to get them properly geared. That just can’t be the vision. It just can’t.

Rerolls!
All looks good to me

We were able to roll out a couple of Quality of Life items pretty quickly this month:

So is the inventory rework going to be more than just adding a token amount of extra space as more gear is released? Or is something more significant planned?
I can’t see anything noted on the roadmap

pretty sure they are referring here to the paltry inventory increase we received already. I could be wrong. But my reading counts this as patting their backs for that massively inadequate bump.

I agree that the update reflects the past increase to space

We definitely need more inventory space. As has already been mentioned, I effectively run one hero because there’s just not the space the collect the gear needed to run more at high levels, never mind pvp. Don’t even get me started on how impossible it is to be truly competitive in pvp if you’re not a whale.

I have a great illustration of just how inadequate the inventory space is. This is every bit of gear I had a few weeks ago: 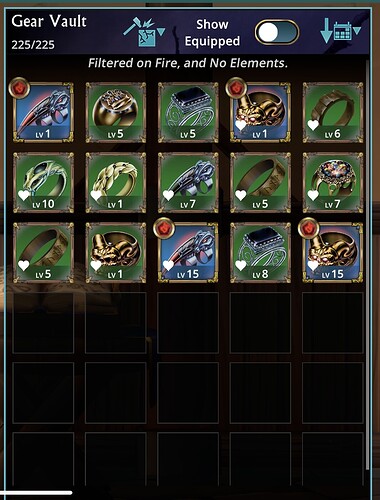 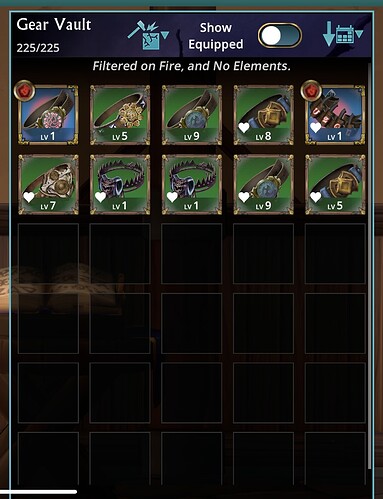 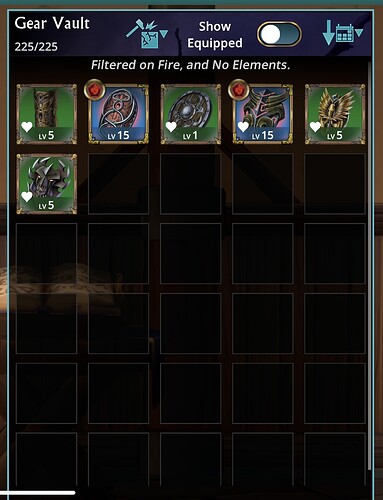 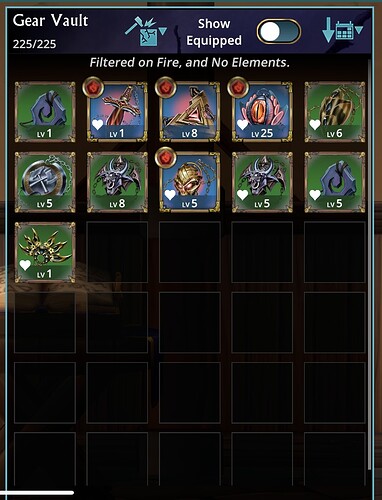 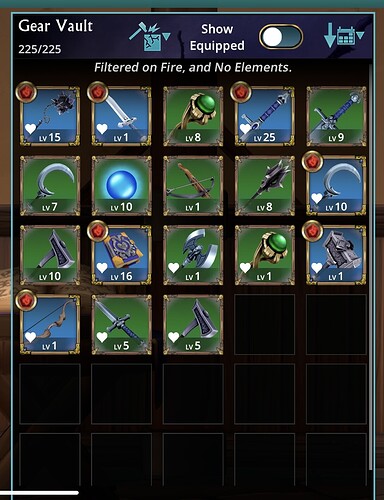 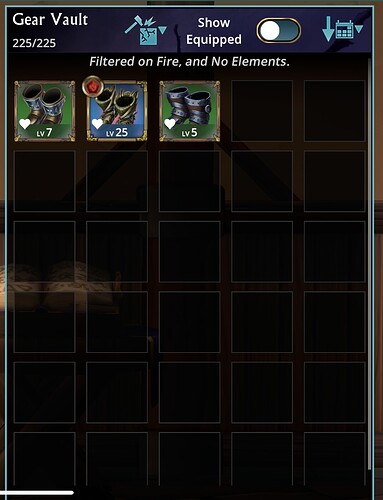 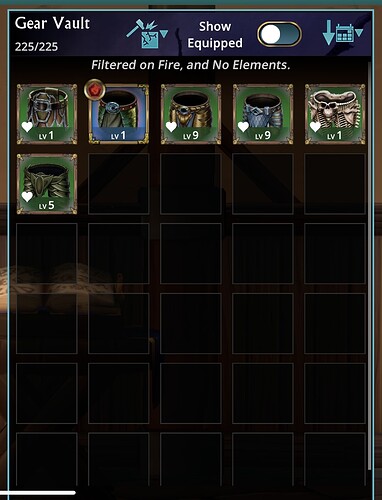 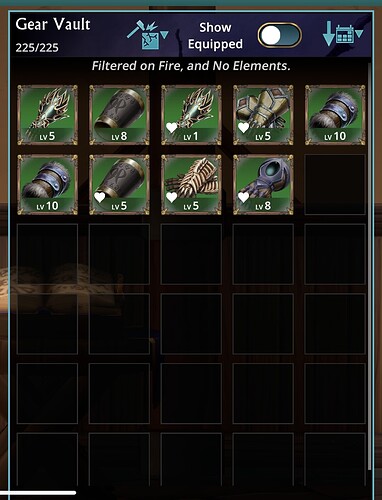 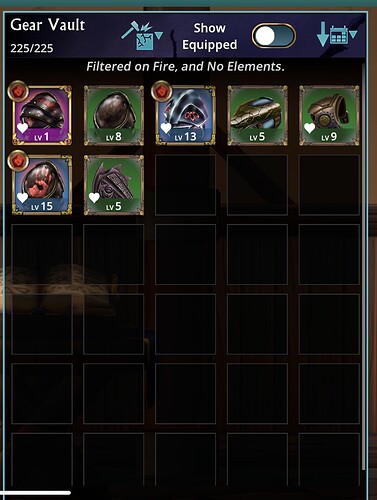 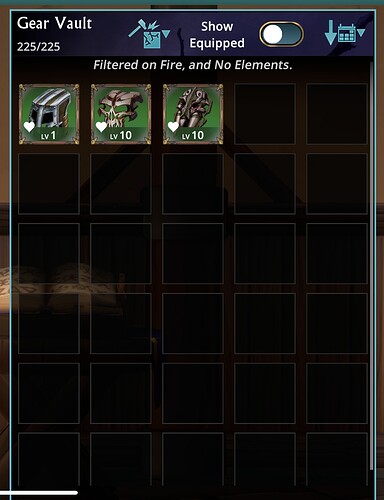 You can see just how little gear I have in each category, yet I’m at the limit. I certainly don’t have enough room for one of each set, or sets for all my heroes. Even without considering element.

As for the update itself:

One other thing: You’re making an optional detailed Vault View instead of just changing things to be more details. More options are good, but it sounds like you don’t really believe that more details and text and less plain icons with no description are things the majority of your players want. It sounds like you believe there’s still a large section of players who will find the textless icons useful, which is… concerning. I don’t know how much of your player base has to actively complain over and over to convince you there’s nothing redeeming about the 1.3 update. We don’t want you to keep bits and pieces of it, thinking they were good changes…

The update is sounding great, nervous about the implementation but hopeful

Just doing a few followers was a good move.

Couple of things to mention:

No mention of not automatically upgrading to max

Can this be an option in the settings? That way people who don’t want it can actively turn it off.

A detailed Vault View options that can show:

*Given all items have the same armor or resistance at a given level I personally don’t find the numbers important to show on the inventory as I go by the level numbers, but it’s not a problem to show them.
*Gear set items. I guess the idea is to help know what the gear pieces are? But we still have to LEARN which icon belongs to which gearset.
*Name display. Great! Until I looked at the sneak peak pictures again and realised these are still the teeny tiny icons you introduced in 1.3. The only way I can see this work is to cover the whole picture with the gear name. I hope I’m wrong as this feels like a band-aid on a badly infected wound.

I really feel the inventory would be so much more useable if the Gear Vault was 2 or 3 icons wide, showing the names always and with a decent size level number (possibly the icons being a little higher too). The old gear rectangles that showed what was equipped would be perfect with the slot swapped for the item name and a few graphical tweaks.

I currently still find my self not using the inventory because of the small nameless icons if I can help it and I just can’t get used to it. Not to mention there has not been a single positive or neutral comment about this specific change on here or on discord. If I want to look up gear information I use my computer web browser and look at gear attributes etc. I just salvage almost everything straight out of the crates instead of deciding if it is something I may want to keep to create a build for another hero at a later date. Anyway…

Screenshot (455)902×273 263 KB
Assuming you’re going to keep the small icons despite the feedback I was thinking that the text is smaller so I compared it to the current size text by taking a screenshot on my phone and blowing it up to your picture here. The new text is much smaller and I doubt I will be able to read it on my phone without squinting and bringing the phone to my face. The current level numbers are already on the border of being uncomfortable to read.
2 Likes
melonfresh October 3, 2022, 11:40pm #13

Can you please give us some sort of option to sort inventroy by set?? A clear division or space between different set gear would make things so much easier to visually and mentally decipher

It sounds like you believe there’s still a large section of players who will find the textless icons useful, which is… concerning. I don’t know how much of your player base has to actively complain over and over to convince you there’s nothing redeeming about the 1.3 update.

Can you please give us some sort of option to sort inventroy by set?? A clear division or space between different set gear would make things so much easier to visually and mentally decipher

Without an easier way, you can use the search function using the set name

That’s it for the September Update, see you in mid October!

So, uh, it reached mid October, and nothing yet. Are we getting a blog release this month?

Due to the extra public holidays, we have had this month, the October Blog will be slightly delayed!

We had also intended on releasing the patch notes for 1.4 early this month, but like the Community Blog this was also unfortunately delayed.

Looking to release 1.4.5 and 1.5 patch notes prior to the update going forward

Ah, makes sense. Awesome, and thanks for the reply!

Since these were all quite chunky features, we’re bringing you the Relics and Shards Changes and the (highly anticipated) Follower Updates with 1.4 on October 19th at 5pm PST [October 20th at 1AM UTC]

Honestly not surprised it’s not out yet, but if the devs are going to put a specific time for a release, rather than just a date, it’d be nice to actually get it out on time. It would be nice to see some feedback from folks letting us know why it’s late though, and when we should really be expecting it.

Keep spamming F5 every minute and waiting. Hope I can see something interesting.