I’ll give the team a QoL request about stacking Adventure Energy so they can consider it and are aware of the feedback.

I’ll also make sure the energy not stacking is mentioned in the Help Center article.

Thank you for both. And kudos on the topic engagement, in general. It is much appreciated! 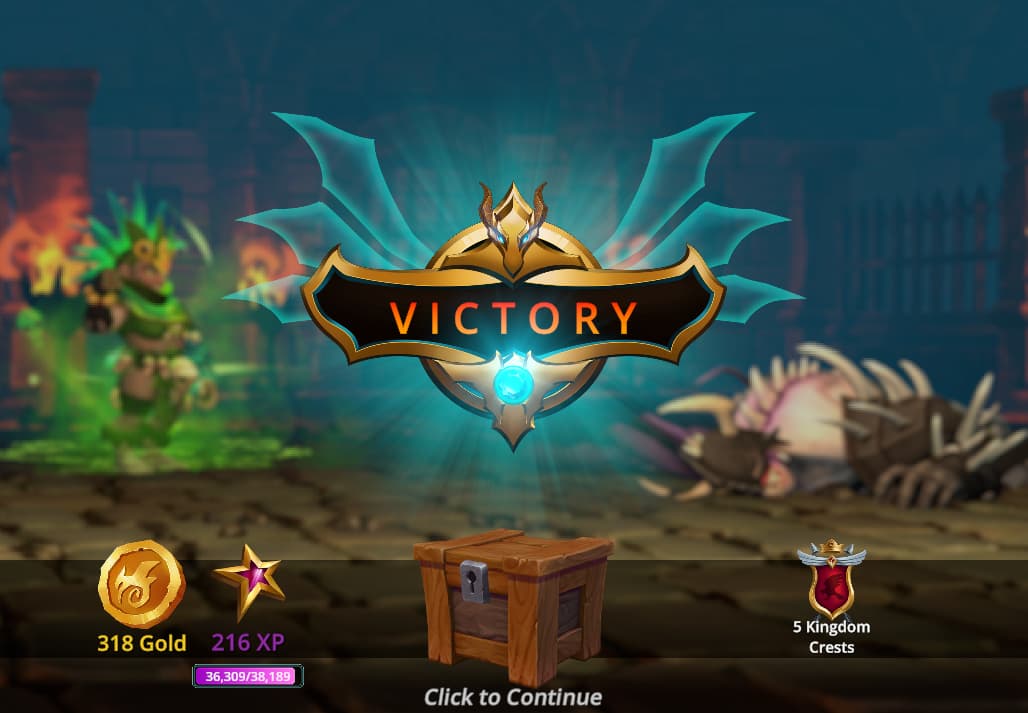 are you sure it was a dungeon? 5 Crests rewarded

also a question I have because I didn’t take notes of the loot drops this time around, do the crest amounts increase or decrease based on the difficulty level you select?

Look at the defeated opponent. That’s Doomkeeper, the Dungeon boss from Doomholt.

Also, Adventure Mode Dungeon chests are not dropping with any identifier icons on them at all, which does suggest that chests that are dropping are currently coded as Skirmish chests.

Look at the defeated opponent. That’s Doomkeeper, the Dungeon boss from Doomholt.

Ok. Dungeon bosses do show up in Skirmish Battles as well so that’s not always indicative.

EDIT: Another player confirmed the same. Here is there screenshot for confirmation of same -

I’ve checked Darkhunter’s droprates with the team and seen them myself as well.

I just got a Legendary Scroll crafted from Darkhunter (Level 25) from the Craft random rune/scroll option for gold/ore. the max rarity is supposed to be Epic.

Looks like there is a bug.
Darkhunter is able to craft +1 rarity level above what is displayed.
I’m following up with the team on this to see when it will be fixed and will add it to the known issues in the help center.

Regarding the Dungeon Chests in Adventure, I spoke to the team and this is intended as there’s no chapter associated with the Adventure Dungeons. I’m going to pre-emptively go ahead and assume you all want Dungeon Chests and put the feedback/QoL in about consistency - if I’m off the mark give me a yell and I’ll withdraw it.

Regarding the Dungeon Chests in Adventure, I spoke to the team and this is intended as there’s no chapter associated with the Adventure Dungeons. I’m going to pre-emptively go ahead and assume you all want Dungeon Chests and put the feedback/QoL in about consistency - if I’m off the mark give me a yell and I’ll withdraw it.

It’s not only the chests but the Crests rewarded are also the amount for a Skirmish-type fight (5 Crests) rather than a Dungeon fight (8 Crests) so its inconsistent on several aspects.

@Jeto/@Kafka Can you offer clarification on this? I’m running 3 different levels of difficulty for this first Adventure and as far as I can tell the only difference in rewards is the Gem reward amount at the opening screen and the amount of resource rewards like gold, shards, ore, etc.

The reward stop at the top of the map after beating the dungeon (rare relic, epic relic, gold) is exactly the same for every difficulty level (which was apparent from the map before the difficulty was even selected). The merchants seem to offer the exact same options, for example this isnthe first merchant offering on the Novice difficulty, same as Ultimate:

Other than gems, is there going to be differences in future adventures? Just getting more shards, gold, and ore at higher difficulties makes this entire effort seem like a fancy skin laid on top of doing skirmishes (I understand there will be other variables like Health Persistence, etc in future adventures).

Also, when receiving the rewards for the lower tiers by completing the difficulty tier above it, is that in reference to the gem rewards shown in the opening screen?

I’ve experienced multiple softlocks in Adventure Mode when attempting to exit via clicking the X button on Steam.

Map icons shrink and fade away and then the game hangs and requires a restart. 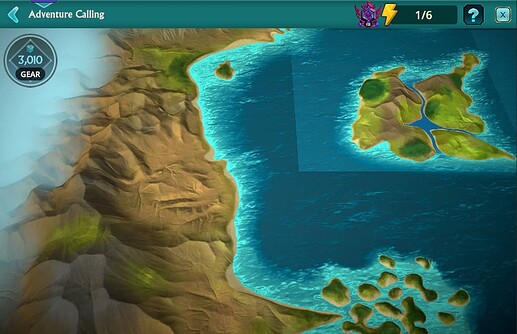 mine does the same thing, it happened to me three times on day two. Tonight on day three it did not happen, I am not sure why.

I’ll give the team a QoL request about stacking Adventure Energy so they can consider it and are aware of the feedback.

Here’s another reason why we need stacking Adventure Energy. My next step require 2 energy, so I will lose the remaining one because it will not carry to the next day energy pool. 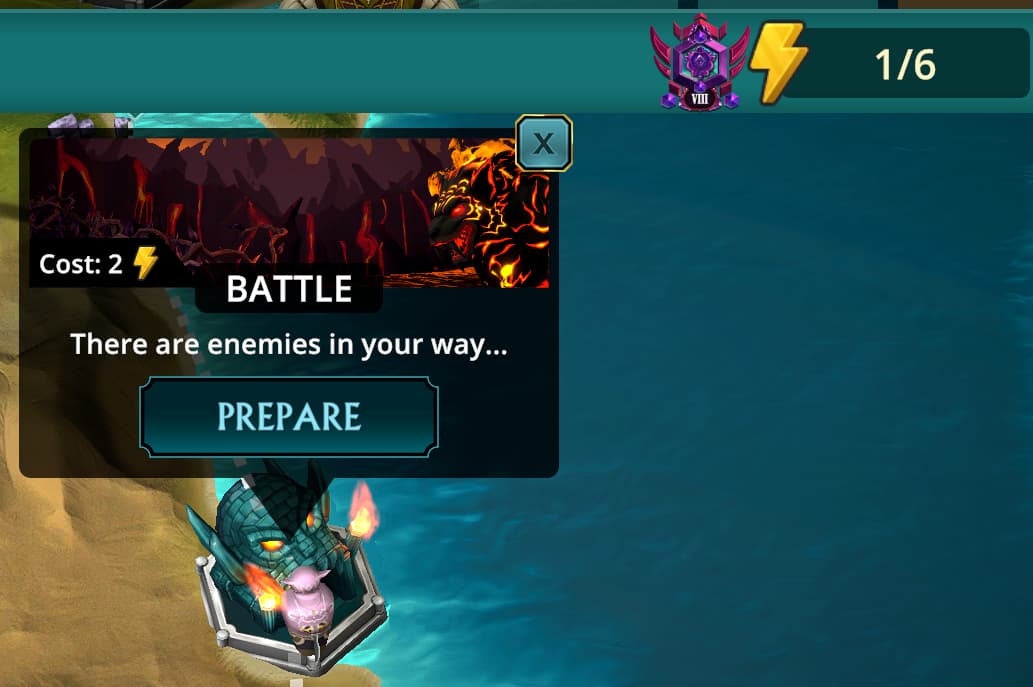 Correction: Today I lost the 1 energy token and got 6 new ones. But luckily these 6 energy tokens were enough to finish the rest of the adventure.
Remark: I did the battles on ultimate level without defeat. After last reward and after talking with Evelines the adventure closed and I got 575gems (I expected to get 200 gems as shown in the adventure bar in the hero screen)

200 is the reward for the ultimate level, but you also get the gem rewards for all of the levels below that.

I think the situation with the dungeon is perfectly fine and should not be changed.

Did a player take the top path on Day 3 and to reach the 3rd merchant tent? If so, then they did not have enough energy to complete the dungeon on the main path that day.

If the player had stayed on the main path (and gave up the opportunity to see what the merchant had), then they would have had the extra energy to clear the dungeon on the main path that day.

Therefore, the lack of energy to clear the dungeon on the main path is a direct consequence of the player voluntarily choosing to seek out the 3rd merchant.

There needs to be hard consequences for the decisions the player makes on the Adventure Map. Otherwise the optimal solution to every Adventure map forever will simply be taking the longest path possible that clears the map in time.

In the future, there could very well be an Adventure where deviating from the main path too many times chasing loot (such as an “escort” mission) could actively result in failing to clear the map in the time limit using such a gating mechanic as the dungeon energy roadblock on the main path.

I agree with Lyrian and would like to see more consequences when making a decision rather than always taking the longest path to get all of the available loot.

To be honest, I also counted the number of stops and estimated an average of 1.5 energy / fight value to determine if I should deviate from the direct path or not. This took into account the hidden “2 stage fights”, dungeons using more energy and myself failing and unwilling to spend gems

Just want to add that the softlock when exiting Adventure mode still happens in Gong’s sushi Surprise. I pressed the x to come out of it after doing 4 or so battles and it’s now softlocked. It happened to me multiple times during the first adventure too.