Ancient Coins are not visible in the Wallet

Season 1.1 just concluded. I received my ending Season Bank rewards and the converted Ancient Coin currency. The Ancient Coins visually went into the Wallet. But there is no confirmation that they exist as they are not shown in the Wallet. I have 2,106 Ancient Coins. Although I’m sure this is being tracked on the back end, it will be likely months before I can confirm my Ancient Coin balance. 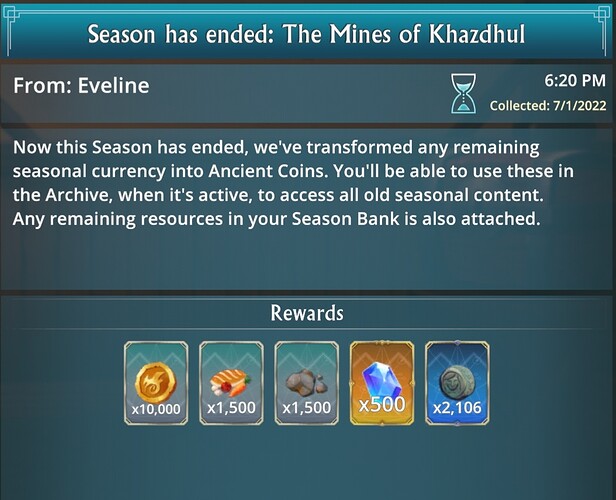 This is not a bug but more of an oversight, as your Ancient Coins will be displayed (much like Seasonal Currency) in the Season Archive once it launches.

I have raised this with the team that in the meantime till that releases, as you are earning Ancient Coin it only makes sense to be able to track and view it!

Adding these to the Wallet will take a client fix, so if I get an update from the dev team on when this could come through I’ll jump back in and share.

@jeto just out of curiosity, how was ancient coin amounts determined? Also, I could be wrong, but I thought we were gonna get bonuses if we had leftover seasonal bank tickets/coins/vouchers? (not sure what the piggybank coins are called)

just out of curiosity, how was ancient coin amounts determined?

Its a 1:1 conversion of any leftover Anthrite.

Also, I could be wrong, but I thought we were gonna get bonuses if we had leftover seasonal bank tickets/coins/vouchers? (not sure what the piggybank coins are called)

For each 50 season battles fought you can max out the bank. If you did not buy a pass then thats it, you get the contents of the bank sent to you as a season ending email. If you bought one of the passes you also get the season ending contents of your bank sent to email but you would have been able throughout the season to use bank tokens to withdraw the contents of the bank (ideally when maxed) and fill it up again, repeating this until you have used up your bank tokens.

There are no bonuses or rollover of bank tokens. It was a use it or lose it item during the Season.