So I am sitting here trying to plan out my next purchases to allow me to upgrade a piece of gear from legendary to mythic, I have decided upon leveling my Fallen Shoulder guards and then I am met with this slap in the face… 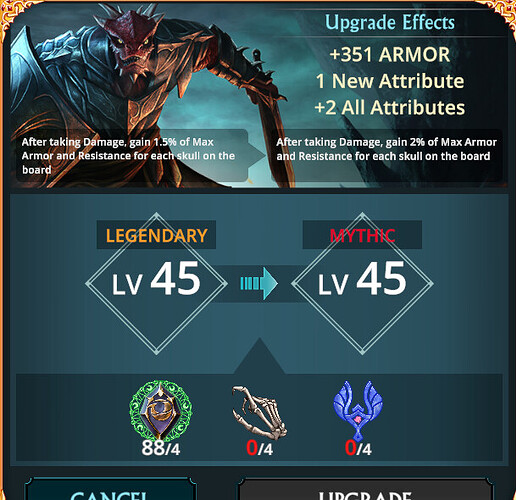 Can you guys not put those superior relics from the seasons on the store? Why do they have to be like this? I can understand not having them on the store while the season is active but we have 4 seasons archived now and no real way to get those relics so that gear is just stuck and un upgradeable at this point. There are so many situations in this game where I am trying to give you guys my money and you just wont let me!

Can this please be looked at? @jeto @Kafka

This is feedback that we have shared previously with the team and is being discussed. Raised it again today and an idea was to include Season Relics in the Archive Store once the Season moves into there.

But is one the team is aware of!

and an idea was to include Season Relics in the Archive Store once the Season moves into there.

This would be beyond awesome!

I would imagine any delay in implementing this idea would be in how to do it without devaluing the season pass, while still making it available for those that couldn’t buy the pass because they hadn’t started playing the game yet.

Perhaps a longer delay before those relics pop into their respective archive shops (similar to the delays in the GoW soul forge?) Perhaps increase the amount available for purchasing during the season, itself?

Just a couple of ideas.

@Jeto any word on when this is going to happen? Thanks for your efforts to help us get some of these frustrating issues fixed.