Hello everyone, here is the latest installment of the adventure mode playthrough series. This one is called “The Deep Mines” and this time we get to go delving with Grungli. He also hints around at the possibility that we might find a glyph so stay tuned to see where that is hiding at!

This is an energy gated adventure so this will be Day 1 and as always I am trying to complete it on ultimate difficulty! I hope you enjoy this and thank you for taking the time to watch my content.

Welcome Puzzle Quest 3 fans! Today I am going to show you the latest in the “adventure mode” gameplay series. This is the latest installment called “The Deep Mines”. Its an adventure with Grungli where he is going to teach us how to mine.

As always I am playing this through on the hardest difficulty setting so you can see it all, its called “ultimate”. Beings it is energy gated I will be doing it in parts for each day. Based on the amount of content in the adventure I am estimating it will take 2 days or 2 parts. This is the second installment, Day 2!

There was a hint at the beginning of the adventure that there might be a glyph to be had so definitely tune in to see where that is hiding!

Thank you for joining me I appreciate you viewing my content 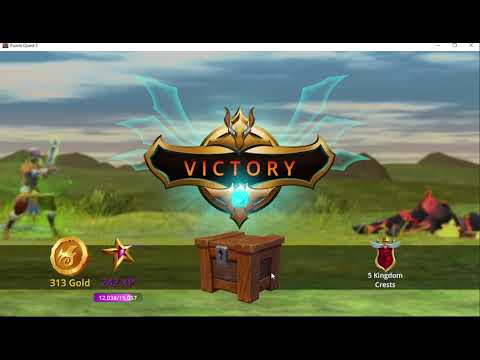 Thanks, nice to see what is ahead

Thank you for taking the time to watch I appreciate that.

It is great what you do because it allows us to see different builds and playstyles. I’m not a part of a high ranking kingdom or a discord community, so this forum is the only place for me to find such information.

I’m playing mainly assassin and warlock at 50 with the same loadout. I don’t want to give you advice, but I would like to ask - have you tried moving your spider juju spell to 4th slot and the skull on the 1st?

Initially, I was like you - the spell that costs the most, I put in the 1st slot. After some time I realized that I’m missing a lot by putting it there because the spells that generate gems are less utilized. So I switched them up in order to be able to cast the gem generating spells more often.

This helped me a lot because I needed less matches to fill them up and with the generated gems I can achieve stun quite often and fill up the rest of the spells much quicker. Luck also plays a role, but much less than before.

Here the stun with the first spell is the most important. Being able to have stun every turn is a blessing and it helps with bosses.

Here the spells are ordered for PVP where I need 6 gem match in order fill them up. For highest level seasons, skirmishes and dungeons, I swap 1 and 3.

I would like to see what you have for sure. I actually had my spells set up exactly like you say but after some counsel from someone in the community that knows way more than I do about this game I decided to switch my big gun to first to make sure it fills up faster because I depend on it for a finisher so much. Trying to find a balance between generating mana gems and fill the big gun is a hard thing to do indeed.

Thank you for sharing!

I checked your first video because I remember you said you switched. Your previous order used channel poison instead of the skulls. My case is a bit better, because I always generate purple gems while your skull spell generates either skulls or green and luck is involved.

yeah my gem generation was better before but I decided to go with spirit mask instead because the ability to cleanse a negative status effect is just too important for me. Plus I also get a sizeable bump to resistance and generate 6 gems or skulls. Granted I don’t want skulls most of the time but I do quite a bit of damage with those too so its not a complete waste.

I tested this setup

My shaman is very low level and I don’t have the same green gear as you, but it was enough to realize that it is not just spell order that matters. The Night Set has 85% chance to generate two purple gems when casting a spell, so I have interest in casting spells often. And it is very easy to fill up the board for a stun.