I fought a Dwarf Druid in PvP who was unusually tall (slightly taller than the Elf Necromancer I was playing).
I was going to upload a screenshot here, but apparently I’m not allowed to. If there’s a better way, I’m open to it.

I have only seen this once, but it persisted for the entire fight.

I was simply playing through PvP battles for the day. I started with the Elite Tourney, ran into her in the Restricted Tourney, and then did the Open Tourney.
I do not remember anything about the character other than race+class, weapon, and the odd appearance.
I tested equipping my Dwarf Druid with a crossbow and doing 1 story battle, and her proportions remained normal.

It was the female Druid Dwarf, but other than that it was the same.

Thank you very much for reporting this issue, I have passed this on to the development team so they get this fixed.

I’ve seen this as well with a female shaman character (no screenshot thankfully). In both instances the character was equipped with the Khazdhuli Crossbow so I’m not sure if that may play some role in the issue.

Yes… this image also has haunted my nightmares, haha

Side note: I saw this character multiple times, and it was the same person each time, which might lend creedence to @Sibelios 's theory regarding it happening based on equipped items.

I have had the same happen to me, 3 times, was the same person each time, also with the crossbow. 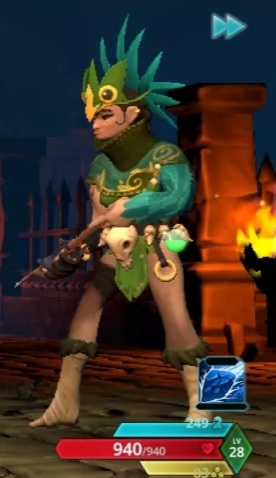