In the devs latest update, they said that they’re making the text and details optional, so it shows they’re still convinced that their textless menu with tiny icons is somehow useful to a large category of people. So I wanted to do an example Inventory/Equip Screen redesign to prove that it’s possible to include all of these details and still have something that looks good. (Personally, I still think that the 1.2 inventory did a great job of looking good and being useful and didn’t need a redesign at all, but if they’re determined to change it, then these are the changes I’d make.)

The main big changes I made are moving the vault to a separate screen (like in 1.2), rearranging and resizing the gear equip buttons, and moving the spells, minions, and stats to be on the same screen as the gear equips. Although it isn’t shown, tooltips would be added with spell and minion ability descriptions (they would show up when the icons for those are tapped/clicked). The reasoning behind my changes, as well as a more descriptive list of all of the changes, are below the images. 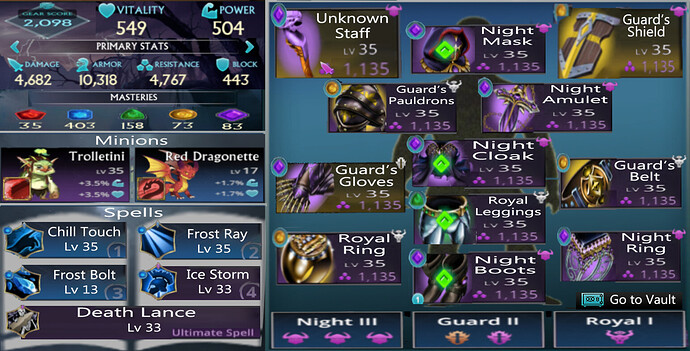 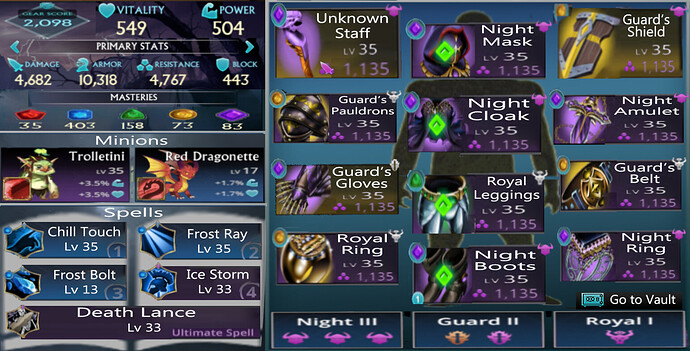 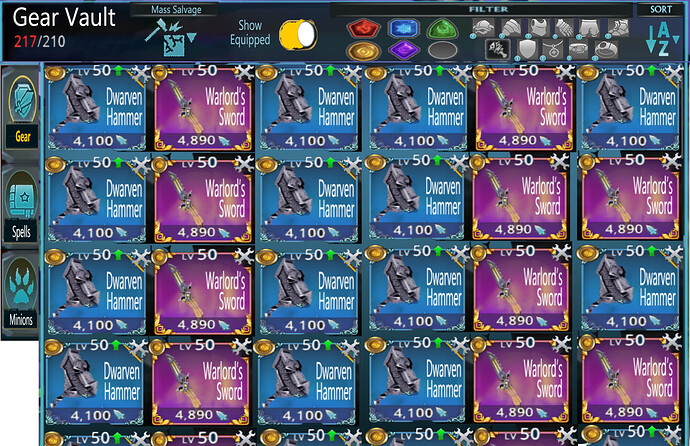 *note: Some things, like the spell book, I didn’t fully finish editing because of the limitations of Photoshop. Treat this as a visual of ideas, not something fully polished.
*note2: I didn’t show popups and tooltips. When equipping gear, a popup would show up with the list of equippable gear for that slot on the left side of the screen (overtop of minions and spells). For the minions and spells, it would show up on the right side of the screen (overtop of gear). Tooltips would show up for spells and the minion abilities when their icon is tapped/clicked on that describe what they do.

Turned hero into a silhouette instead.

Made all of the gear slots bigger and added name, level, and set to them

Moved stats, and spell and minion equips to the same screen as the gear equips.

Changed spell equip menu to be icons in a spell book instead.

Changed minion equip menu to be like in the arena.

Put vault into inventory screen that allows you to see everything a player has. Changed Vault to have tabs for gear, spells, and minions.

Used space gained by putting the vault on its own screen to make the filters visible at the top without needing to go into a menu.

So that’s my redesign, as well as my reasoning for changing what I did. Hopefully it shows that things can have descriptive text and still look nice. Let me know what you think!