Question to all my Spreadsheet- loving Puzzle Questers:
Anyone here document the Follower side quest rewards (ideally per quest) pre-patch?

Why I ask:
I think it could be handy to document the differences in rewards for each side quest pre vs. post-patch so that we can see how the changes in rewards (esp. follower crystals) impact progression and game play moving forward.

Tracking Accomplishments = Prizes!:
The Puzzle Quest team has already developed a great way to track accomplishments. Users can see this when they track story chapter completion, side quest completion by follower, and many other goals through the Tavern.

The PQ3 team was able to use their excellent tracking of game data to supply a rad legendary shield to all players who had previously completed the story. In fact, they were even able to see if the player had completed the story on multiple classes and provided a shield reward for each completion on a novel class. (Yay! And also, thank you!)

Let’s Use a System Already in Place:
Would there be a way to apply this same approach to follower crystals, and send follower crystals to players who had completed the side quests prior to the patch?

The data is already there, just like the chapter/story completion data. It’s even handily broken down by follower (i.e. each follower’ s side quest completion is tracked separately). And the code to send rewards to users for past goals is already there (see: the super rad legendary shields).

So why does this matter? Why even bother?:
Simply put, follower level directly impacts not just quality of life, but ability to move through game content in general.

And these early followers had more side-quests to complete, which means more crystals to level/evolve them, especially post-patch.

Pre-patch players got a certain number of follower crystals from completing the side quests, and once those quests were done, the flow of crystals reaaaally dried up (unless you wanted to buy a whole lot of crowns, which is fine, but no one likes feeling coerced to purchase).

That means those sweet sweet side quest crystals mattered - a lot - when it came to leveling up Followers and using them to progress in the game.

PQ3 Team, You Did Good:
I actually deeply appreciate that the PQ3 team made the game more accessible for new players by boosting resource availability, reducing cost of certain key resources, and making it easier to level Followers by increasing the number of crystals available through side quests.

I suspect these changes will increase the retention of new players (yay!) and at least some of those players will spend money (yay for PQ3! - they are a business after all, and businesses generally want to make profit).

But There’s More to Do:
I’m sure you’ve heard your long-term players grumble (maybe loudly) about the Follower Crystal issue. And I know that you do listen (or else you wouldn’t have heard the previous dissatisfaction about the lack of reward at the end of your epic storyline).

I also know you don’t want to alienate your dedicated long-term players by hamstringing them and making them function on an uneven playing field.

And it will be uneven - because just like old players, new players will eventually hit that crystal drought that comes when the side quests end, but new (post-patch) players will hit it with more crystals in their pocket.

We’re like kids in a candy store. We all want to get something tasty, but some of us are heading in with a dollar, while others are walking in with a nice, crisp $20 in hand. And the PQ3 team is the one handing out our allowances.

More crystals = leveling followers more quickly than anyone who completed those side quests pre-patch. This gives those new players faster access to the sweet benefits those higher level followers bring - like better gear and better ability to level that gear. And we know gear score affects -everything- in this game.

Leader boards that give premium gems as a reward (directly affecting how and when players will potentially spend money on the game).

This Crystal Discrepancy Honestly Wouldn’t Matter At All, Except:

In summary:
I’ve talked a lot, and hopefully some of it made sense! I would love to see the imbalance addressed, because I dig this game and plan to stick around for a while.

Question to all my Spreadsheet- loving Puzzle Questers:
Anyone here document the Follower side quest rewards (ideally per quest) pre-patch?

I think this is the visual you are looking for: 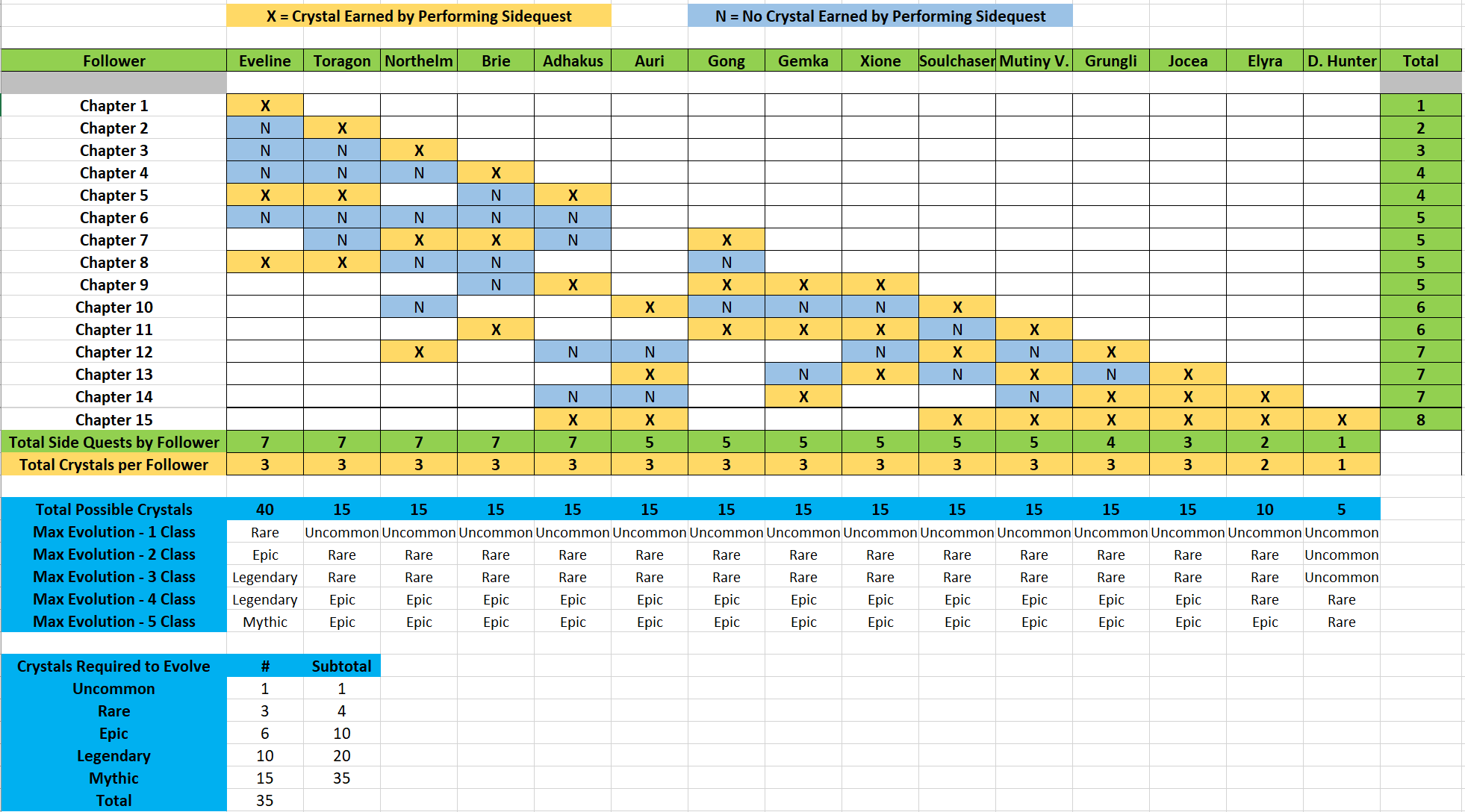 From @Sibelios response in this thread:

Awesome update @Tacet. I think you are spot on in your weightings. Much appreciated. Given the changes to the manner of levelling and evolving followers, I was curious how the framework functions and where each follower would be based on how a player pursued progression of the 5 classes. Before the update, there was no need to level all classes as it related to follower progression but now that has changed entirely. EDIT: 5/31/2021 This post has been updated based on the 0.35 Server Push upda…

That table was accurate from patch 0.35 up until these latest changes. I’m not sure what chapters drop what with the latest change as I had already completed 5 playthroughs, one with each class.

I hope the reworked crystals are retrospectively awarded to those who had already completed the chapters across 1-5 classes, since after 5 playthroughs players are left in limbo for maybe 6 months until luck chances them enough of each follower crystal to evolve many from Epic to Legendary.

Our previous expectation was that more classes were to be added to the game, and those would bring with them more opportunity for follower crystals. Though they were expected to be added with the launch from Early Access, and evidently that didn’t happen.

That table was accurate from patch 0.35 up until these latest changes. I’m not sure what chapters drop what with the latest change as I had already completed 5 playthroughs, one with each class.

Working on an update by gathering detail from players since my request for this information from @Jeto went unanswered.

Hi Petra, thanks for posting your thoughts on the situation!

The potential problem here is that for some us really old-timers here that started with the initial Early Access version of the game in 0.34, this logic doesn’t hold true. This is because in the initial version of the game, most of the early and mid-story followers awarded 5 crystals per run. In the first update, 0.35, the devs nerfed crystals awarded per run to 3. That change is what the graph posted by Avenger and created by Sibellos reflects.

Likely, when the changes in 0.35 landed, the update simply rewrote the loot reward table for the follower quests. As you note, the game is aware of what chapters have been completed by players. On the other hand, the game is highly likely not aware of what the actual reward that was given to the player (0.34 reward v. 0.35 nerfed reward v. 1.0.2 reward). As such, the devs probably do not have the information on hand regarding how many of the 0.34 players received a follower crystal reward that was removed in 0.35 and possibly restored in 1.0.2.

That’s a really messy situation for the 0.34 players, although I doubt that there are very many of us left in which this issue would affect us. How would the devs know whether to reward one of these players a follower crystal from yesterday’s changes if that player earned that crystal pre-nerf in 0.34 if that information was not kept?

I’ll obviously not say no to free follower crystals, but to me the devs appear to be signalling figuring this differential is either too much of a headache for the effort or not possible at all because of the above logic. A blanket 1 crystal for everyone would be a fair compromise, but then again that can open Pandora’s Box here. If the devs agree at 1 crystal compromise, there is the issue that all of us 0.34 players very likely have run all five classes through the story. Would that mean that we should be awarded 5 of every type of crystal as fair compensation? Again, a potentially messy situation. And one I think the devs don’t want to touch, even for a limited group of players.

This Crystal Discrepancy Honestly Wouldn’t Matter At All, Except:

Crystals aren’t going to make of break a player on events or PvP, gear does. No followers directly boost a player’s PvE capabilities, and Gong currently only awards additional PvP tokens. The power/life boosts from pets are from the minion levels themselves and not Gong himself.

In the future, if the devs add followers that directly boost player stats, then your argument is a very valid concern.

Good to see a new face around these parts. Hope to read more of your thoughts in the future.

This crystal thing is a pretty big issue for me too. It is an excellent idea to give people the ability to get many followers to legendary just by playing through all the different heros.

Part of my playstyle is that I have prioritized getting follower crystals whilst playing the game above anything else. Because of this I have managed to get 55 follower crystals from Wooden Marks, Daily Challenges, The Shop and Chests (I think 3 from chests). This is sort of ok and i have managed to get a couple of followers to legendary. I have done over 300 Ruins of Morsauloth Dungeons to try to get Northelm Crystals but have never got one from a chest. Also with the recent shop price reduction to 300 gems and 3x a week instead of 1x helps get crystals.

My PROBLEM! Out of these 55 crystals in 6 months only 1 has been for Northelm, JUST 1!. This means I am still stuck with an inventory size of 120 and I still need 4 crystals to upgrade Northelm. This is why I currently I generally only play the Events/Verses/Daily Challenges because I have no inventory space for new gear. And furthermore, getting Northelm (or any other) to Mythic just seems like a dream.

To have any hope of getting followers to mythic (and it feels like getting Northelm to legendary) I would very much like those crystals I have missed out on.

@Lyrian Crystals aren’t going to make of break a player on events or PvP, gear does.

Being able to get followers to Legendary rather than Epic helps you get that gear, the shards for upgrading and the inventory space for it. It certainly could be make or break to the number of gems you recieve in events or PVP! 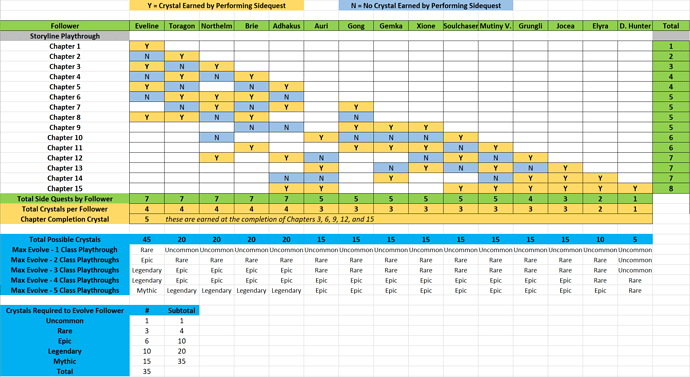 The chart above should have Northelm Chapter 8, not Chapter 7, as a Crystal Sidequest. Will provide an updated chart for Update 1.3