For part 2 of my feedback, I’ll be discussing the menus and navigability of the game.

Some parts of the menu navigation are great. I really like how easy it is to swap heroes, and the way that it’s done (with the portrait list for quick access and then the dynamic portrait on a click for more detail and coolness).

I also like the existence of the wallet, and the way it displays the resources in categories with their icon and a number, making it easy to identify them and see how many you have of them at a glance. Its location as a small icon in the top right and it being a dropdown menu rather than a separate screen makes it easily accessible from anywhere, which is extremely helpful. It’s also a nice size on the screen.

The existence of the gear set bonus menu is great. It looks nice and provides a lot of helpful information at a glance. The vertical tabs that show each category of gear are very useful. Equipment upgrade materials are dependent on which of the 3 categories a piece of gear is, so it’s nice to see what gear is in which category and compare what you have equipped in that category at a glance.

Gear and spells being separate tabs in the same menu makes it easy to switch back and forth between them quickly when making or modifying sets, which is nice.

The existence of loadouts and ability to edit the name of them is phenomenally helpful.

The ability to see story progress right on the hub and have a quick way to start the next battle is very nice.

I currently find the game rather hard to navigate overall, so I was very glad to hear in the July community update that all of the menus are being changed to improve this issue. The new hub, new “Battles” tab, and gear menu improvements sound like they will fix a lot of the major issues I have. There are a couple of additional issues I’d like to bring up, some of which the team are hopefully already addressing with this update and some that likely haven’t been considered yet.

Stages just feel not-so-great to navigate between. The snap-to-location menu is nice, as it makes navigation easy, but it also feels very restrictive. The map that exists in the game is really nice, and even has a trail between locations showing the route you take as you’re journeying. This provides an immersive feel. However, you actually can’t look at the map because you’re forced into menus that take up so much of the screen and can’t scroll around separately from them.

I seem to remember that at one time, you had a map that you swiped around on to get to stages. I really miss it. It made it feel more like a world that you were journeying through, rather than just a series of linear battles. Bringing this back would be a major improvement in the feel of navigation. Perhaps the menu could show up when you tap on a stage, with the arrows to go to each map location like how it is now, but then when you swipe, the menu disappears and you can move freely around the map. That would strike a nice balance between ease of navigation and the free exploration and feel of a world map.

For the Story, it only shows your stage progression. If there are multiple battles in a stage, or if the stage involves a conversation, it doesn’t show that you need to complete multiple things to complete that stage. After a fight, it just puts you back to the main hub with the story part number unchanged. This lack of feedback makes it feel like a bug when it does this, rather than something intended, and also makes it hard to track progress. The side quests have that nice progress bar showing conversations and battles. It would be a big improvement if each stage in a chapter could have one of those as well.

Also in regards to the story, it would be nice to have a confirmation button for the story battle menu in the main hub. I can’t count the number of times I’ve accidentally clicked on it when I haven’t meant to.

I rather like how the gear menu is already, but hopefully the upcoming changes improve it even more. Here are some additional improvements that could be made.

On the gear set bonuses page, it would be nice if it had a number showing how many pieces of that set you have equipped (because sometimes you have an odd number of set items equipped, and there’s no way to see that currently, as it just tells you what sets are active).
When you tap a piece of gear, it gives flavor text about that item, which is cool but not helpful. It would be much more useful if it displayed what effect that piece of gear has.

I think the minion menu could use a total rework, as right now it isn’t very easy to use. It doesn’t show very many minions at once, or show stats, making it hard to compare monsters. Each monster’s listing also has an ‘i’ icon which is useless, as it should give more information when tapped, but instead does nothing. I think the best route would be to make the minion list into rows of boxes with the minion’s picture instead. I made an example in Photoshop of what this could look like (note that I did forget to leave space the resting info but the box could be extended slightly and the info placed above or below the stats): 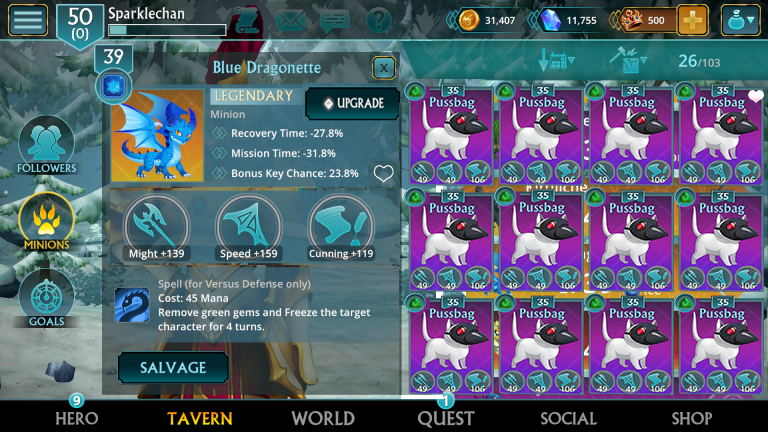 PQ3_minion_menu_rework-2768×432 447 KB
Hopefully something similar could be done, as it would be a big improvement.

It would also be very nice to have a list of side quests and when each one is unlocked visible for each character, as it’s very hard to determine that information currently. Perhaps when the side quest is tapped on, instead of the character box on the left side of the screen staying the same, it could be replaced with the list of quests.

The menu items are grouped a bit strangely, which makes it hard to find things sometimes. The tab with all the battles being called ‘World’ instead of ‘Battles’ is already being addressed, thankfully, and that change alone will make things easier to find. However, there are other improvements that could be made too.

First of all, the friends menu is rather hard to reach where it is right now. There’s space for one more icon in the bar at the top, so perhaps it could go there? That way it would be easy to access, which would encourage the social aspects of the game.

The ‘Kingdom’ should definitely get its own separate tab in the bottom nav. There’s just so much stuff in that one screen that’s a link to another important screen with tabs. Raising all of that a level means easier ability to find things and a lot less taps to navigate, as it would then have access to its own side tabs.

The first side tab could be named either ‘Info’ or ‘Overview’, and it could display the kingdom overview, kingdom activity, the kingdom message, the kingdom settings (which are currently buried in levels of menus and hard to find), and the player’s rank.

The second tab could be ‘Roster’, and it could display the kingdom’s roster. This information is referenced often by players, so it having its own tab would be beneficial.

The fourth tab could be ‘Treasury’. This is less strictly necessary than the other changes, but there’s enough space for it to have its own tab, so it might as well. It will make it easier to access.

The fifth and final tab could be Bazaar, as it is used multiple times daily by players, and thus deserves to have its own tab for easy access.

Here’s an example (with the guild info censored):

PQ3_kingdoms-overview-v2-censored2220×1080 627 KB
Something like this would make it a lot easier to use the kingdom. And having a tab for it in eyesight all the time will remind players to participate!

I think the ‘Parties’ tab should be renamed to Multiplayer (as this name is much easier to understand immediately) and made its own separate tab in the bottom nav. I think it’s likely possible to put one more tab into the bottom nav without making things squished, and that would be the ideal location for it. (If not, moving it to ‘Battles’ would be my secondary choice.) The menu for multiplayer could use some improvement as well, but since multiplayer’s function needs an overhaul too, and it’s an important enough aspect of the game that it deserves its own post, I’ll include the menu stuff in a separate post about it.

I understand that the goals are likely in the tavern because they give stat boosts however, them being here just feels rather weird. Perhaps the ‘Quest’ tab could be reworked to contain both goals (/regular quests) and quest pass quests. and the goals tab could be changed to be ‘Stat Buffs’ or something instead and only show the stat rewards from the quests. Having the quests be more accessible and bringing them to the front more as goals to work towards rather than something that players get almost by accident while playing (like how it seems to be now) would be a big step in improving the player experience.

I think the Citadel should get its own separate tab in the tavern. This would make more sense and improve ease of use.

**I think the Quest tab could use a revamp as well, as the information is just not laid out well, making it look complicated and confusing. I’ll give that its own separate post as well though.

If you read this far, thank you very much! I know it was a big wall of text. But there’s a lot to discuss! These are all ways I think the menus could get improved, to help keep alive a game that has the potential to be really great. Hopefully this gets the conversation started for other people’s ideas as well, and that the devs are able to take some inspiration from all of our ideas! Let me know what you think!

4 Likes
Update 1.3 Feedback: We Appreciate Your Hard Work, But You Completely Missed The Mark
A Message from the Devs on 1.3 Feedback