Is it possible to loot a seasonal spell if it’s accidentally salvaged?

Last night I was trying to look through my spell list because I wanted to add a certain spell to my build. It’s called dark machinations it was a seasonal spell that was only purchasable with seasonal currency. I did purchase it when the season was active but I got to looking at my list and I no longer have it I guess that means I accidentally salvaged it.

Is it possible to farm it as a drop from the season it was in? Do those spells even seed to chests or because they are the seasonal buys is that the only way they can be acquired?

I do not mind farming for it, it’s my own fault for salvaging it (I am guessing that’s why its gone) but I don’t want to waste days farming mines of khazdhul 1.1 if those don’t even seed to chests.

Is it possible for xione to craft those?

If neither of these is possible how can I acquire it again? It doesn’t seem fair that the game might be designed that I am out of luck on having a spell, especially since I did buy it. If I hadn’t done the work to earn it then I wouldn’t ask but I did so any help on this? 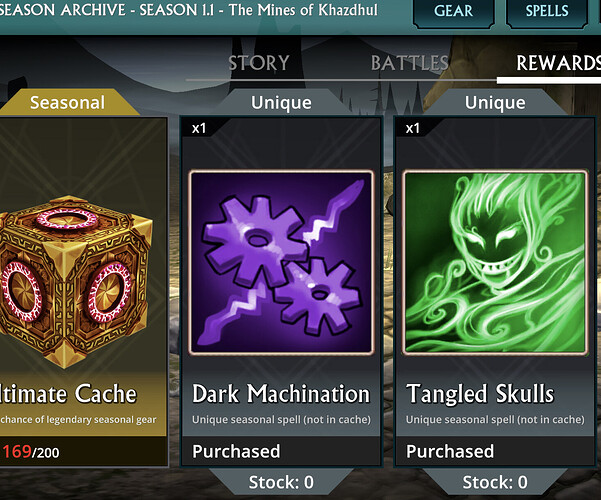 i may have got the help i needed already, another player told me that he had the same problem and he submitted a ticket and got it resolved. I have done the same and hopefully i can get the same help!