PROBLEM: Spirit Dragon mana goes from zero to full without ANY matches of their color (including incidental matches)

I’m having a hard time understanding how the Spirit Dragons in Kingdom Defense gain their mana. If I match the dragon’s color, I can understand how they go from zero to full mana. However, many times when I do not make ANY matches with their color - not even incidental matches after I end my turn - somehow, they still go from zero to full mana. This is a bad mechanic, because it totally takes away from any strategy I might do to prevent the enemy from gaining extra mana. We’re approaching the point where the dragon gains so much mana so fast that no matter how powerful I become or how strategic I am with my matches, I’m only going to end up with three turns.

I have not seen this happen ever. Perhaps you are not taking into account explosions or destructions of gems? Those count as collected and count towards mana gain of the raid boss just like matches. If what you are describing occurs, God Wang would not be able to take 100+ turns just pressing “End Turn” over and over and over to use passive mana gains to deal absurd damage to the boss (cough cough needs a fix cough cough)

The situation was me versus a Blue Spirit Dragon (BSD). There were a bunch of blue gems which I converted to red gems using “Scorching Ray”. From the start of my turn to the end of my turn, no blue gems were exploded, purposely matched, or accidentally matched. However, after ending the turn, the enemy’s mana went from zero to full.

I guess maybe I’m matching so many non-blue gems, that it is enough to fill the BSD’s mana bar?

Either that, or maybe the blue gems that get converted to red gems still count as blue gems when filling the BSD’s mana bar?

From the start of my turn to the end of my turn, no blue gems were exploded, purposely matched, or accidentally matched.

So just to post here our discussion as well for anyone curious, all gems matched, exploded, or destroyed in any way count towards dragon main gain regardless of color at a base value of 2 mana per gem. Blue gems would give an additional 25% mana gain to a Blue enemy (such as a Blue Kingdom Defense dragon). Unfortunately purposefully avoiding the color gems of the enemy will not substantively slow down enemy mana gain as long as gems of any color are being collected in some way.

Thank you for that clarification, @Sibelios!!!

That creates a weird dynamic for KD, though. I guess you have to make very very very very precise matches. Otherwise, they gain power too quickly, even if you avoid their color.

That creates a weird dynamic for KD, though. I guess you have to make very very very very precise matches. Otherwise, they gain power too quickly, even if you avoid their color.

Spirit dragons have very fast charging spells (50 mana). So, even while avoiding matching the dragon’s color as much as possible, charging its next spell is very easy to do even by accident or by skyfalling gems.

Effective spirit dragon runs involve maximizing the number of actions the player can take, while matching as few gems as possible to enable those actions (without dying from incoming damage from taking too many turns). Generating large matches of a color are generally the most inefficient action a player can take against the spirit dragon, which disproportionately affects multiple classes that tend to want to make rows or blobs of gems as their class’s playstyle.

It would be nice if the required meta to attack the spirit dragons changed from time to time to mix things up a bit with them.

@Lyrian That is an interesting and insightful analysis! My primary character is a skulls-based loadout focused on critical hits. What’s a good strategy for such a character?

A skulls based, critical hit character is the best to run. The trick is to make as few matches as possible to fill your spells and trigger your crit cascades only on the turns the dragon will cast their spells anyway, so your board full of skulls won’t hurt you. It’s really counter intuitive. You’re playing a match 3 game in a mode you want to make as few matches as possible.

What you want to do is to maximize a concept that is known as the action (or turn) economy. You want to get the most benefit for the least amount of effort possible. In an environment where you are extremely limited in the number of moves you can make (because the dragon’s spells will fire very quickly), every match matters.

For example, IMO, the gold standard for gloves for skull builds is still the Guard’s Glove. 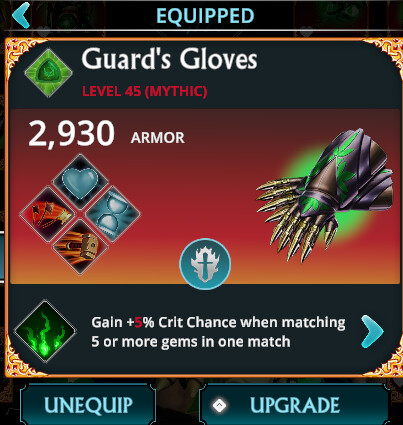 If you are generating gems/skulls regularly, then making a blob of a color/skulls to trigger the gear effect is rather simple to achieve. But, instead of making a big blob of color/skulls, would it be possible to manipulate the board into two separate match-5s to trigger the effect twice in the same turn? Three times?

If you have the high-rarity gear to either take (or sustain through healing) a few dragon hits , then it might be possible to take a random match-5 (if the board state is bad) to trigger the gear passive in preparation for a big strike when there is no longer any way to make a move without the dragon’s next spell firing.

Take a closer look at gear passives in general. If you can trigger multiple of these with every single move you make, you can generate a lot of “free” actions that would not normally be possible otherwise. A word of caution though. As Sibellos mentioned above, any additional passively generated gems/skulls that get matched/exploded also count towards filling the dragon’s mana which can backfire on the player occasionally.

Thank you @Ketaped & @Lyrian for your advice! I’ll chew on this and see how things go on the next KD

It would be nice if the required meta to attack the spirit dragons changed from time to time to mix things up a bit with them.

This is a great idea. I have an add on…

Instead of the spirit dragons being completely immune to status effects, it would be more interesting if each of the dragons were immune to all but one. Maybe the dark dragon is vulnerable only to blind, the red dragon is only vulnerable to freeze, blue dragon vulnerable to poison, green vulnerable to burn and light dragon can only be hexed (arguably useless haha). But something along those lines.

Basically I’m thinking the same as you. Something to make it more interesting.

reading this thread and understanding how this KD dragons work is depressing. It seems totally against the design of the game - ie building your character up to be powerful matching gems - to suddenly have to do it totally differently.
That and the cost of getting Mythic level items (ie spending over $100 for each item) is really spoiling this game.