Screenshot or image
Apparently I’m not allowed to upload screenshots, otherwise there would be one right here.

What you were expecting to happen, and what actually happened
While doing dungeons under the Battles tab under Season 1.2, the banner announcing I was about to fight the Hellion appeared, but didn’t go away and the board never appeared. I could see my character and the Hellion moving in the background, so it wasn’t completely frozen. Eventually, I simply quit the game and restarted it, and that made the board appear and let me proceed with the battles.

How often does this happen? When did it begin happening?
So far this has happened all 4 of the times I’ve done season dungeons today: 3 on Windows and then 1 on Android.

Steps to make it happen again
It happened at the same spot during each of the 4 season dungeon battles I’ve done today. The boss was the Hellion each time, so I don’t know if it’s him specifically or bosses in general.

Other things I’ve done today where the problem did not pop up:

Several others have experienced this as well. Here is a screenshot of the game hanging as described and not advancing: 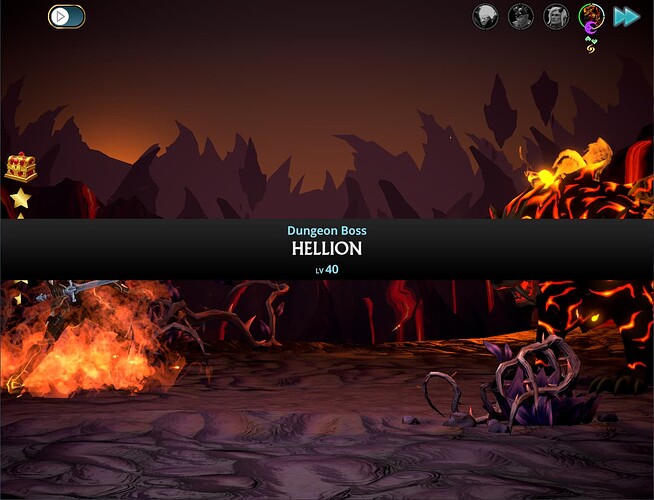 Same has happened everytime i have encountered the hellion.

I have had to close the game completely a d reopen and then can proceed.

+1 to the bug report count on this one, verifying what everyone else has previously reported.

As Marin notes, the instance resumes intended functioning upon manual force closing and restarting of the game.

+1 to the bug count on this

Adding my voice to the choir. Whenever this boss appears, the game hangs.

Thank you for reporting this bug. I have reported this to the Development Team who now are currently investigating the issue so they can get a fix out asap!

Just providing a quick update on this issue. A fix has gone out for this, but you’ll notice that Hellion will appear as a regular Hellcat for now.

Hellion will be back properly when the next client update is released. This won’t be seen until this season hits the Archive.

Thanks again for your patience