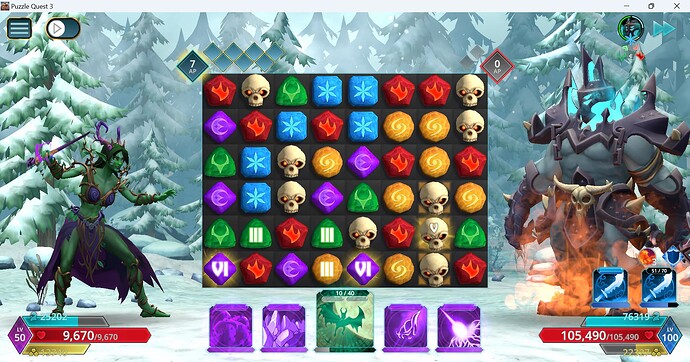 I just updated to 1.5.5 and it seems like burn does not cause any damage now. In the screenshot, I already burned the enemy for one turn and it is still at full hp. I tried another turn with 4 imp gems on board and still 0 damage. (see below)

It seems to happen on every single fight now. 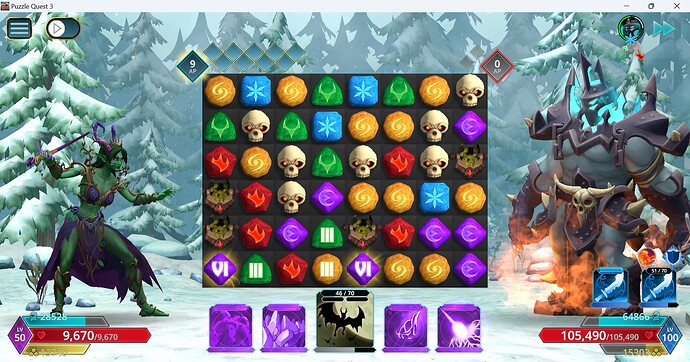 I immediately noticed this too. I believe burn damage doesn’t trigger if the enemy is stunned.

edit: in regards to Doomknight not taking damage, it could be that there is other reductions being applied, which is why it does not take damage. Such as Doomknights passive will drop it by 50% and the Elemental Triangle will be a further 20% etc.

I am looking into this currently as I run about! But I just completed a battle and saw Burn apply damage, I cast Summer Rain.

If anyone notices it not applying, can you list the enemy you faced and what spell you cast.

Thanks, I’ve passed this on too!

In the same hunt battle, second oppoenent: wraith’s shadow, eldritch blast followed by dark firebolt, burning killed it in one shot. (I have stacked enough imp gems and brimstones to make 200%+ damage in all cases and should just one-shot the opponent regardless, so it is not damage reduction or healing).

Third fight in the same hunt battle against elfbreaker, dark firebolt only, no burn damage.

Finally, the two spell which look the same are doom shield and frozen blade. They just have the same icon.

No worries, this should be plenty to go with for now… currently looking into if it is Hero specific (Warlock) as I mentioned, I play a Necromancer and haven’t had any issues.

Another update, fight against elfbreaker, burn damage did not apply in the first two turns (no damage at all), then one shot the opponent in turn 3…

Try stunning. I can pretty reliably trigger no burn damage on warlock and Necro if the enemy is burning and then stunned. As soon as the enemy stops being stunned, the burn damage ticks again.

Did mines in adventure, skirmish, dungeons. 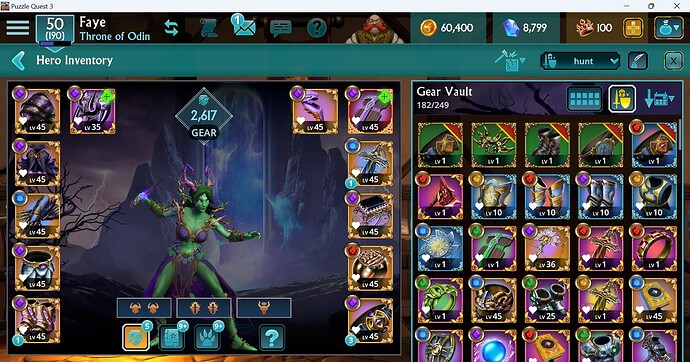 I think I have the same result as Yukit: no burn damage when the enemy is stunned.

@Jeto , I can also now confirm that burn damage does NOT occur if the enemy is stun locked. This is for Warlock that I have observed . This is a new development from today.

The culprit, I would wager, is from this patch note change:

When a character is stunned, any effects they have which happen at the start of their turn will no longer activate.

Next time people experience this, can you check (as @Yukit mentioned) if you happened to have stunned them prior - would explain why I have yet to be able to reproduce so far, cos I’m terrible at getting large matches

When a character is stunned, any effects they have which happen at the start of their turn will no longer activate.

@Jeto , I have tried different combinations, but it’s the same always. If stunned, burn damage does not occur. For eg, I have tried burning the enemy first, and then stunning. No burn effect later. I have only tried Warlock, others except Assassin I don’t play much. Not forgetting, if not stunned the burn damage do occur as before.

There has been no further communication on the lack of burn damage when stunned issue, @Jeto .

As it has only been 2 days, we currently don’t have any further updates right now.

We’ll let you know as soon as we receive any further information.