Platform: PC -Windows 10 - Steam
1!st Issue: Since yesterday when I launch the game from Steam, the game launches but sometimes hangs on Broken Tree looad screen. Sometimes just freezes, sometimes gives me a “server busy, retry again later” error, sometimes a server tiemout error.
I uninstalled and reinstalled game twice, cleaned out my steam cache - I have a high end gaming PC and and make sure everything on it is always up to date. - all drivers, graphic cards, Windows up to date. Sometimes the game loads and launches, sometimes not. It’s also slow. To note that I’m having issues with gems of War too - it won’t launch at all, freezes on load screen.

Second issue: Broken Tree Rewards page, unique skins. It shows the Shaman skin as having been purchased, but I didn’t purchase it and don’t own it. I’d like to purchase it, so would be happy if you fixed this so I can. 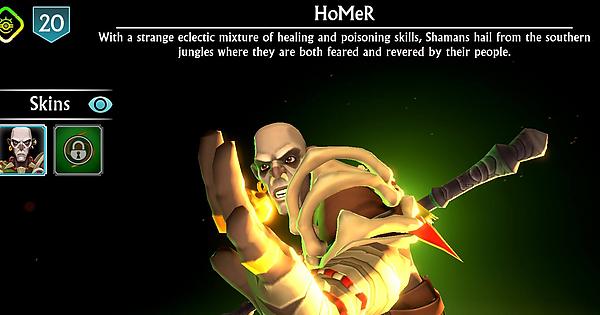 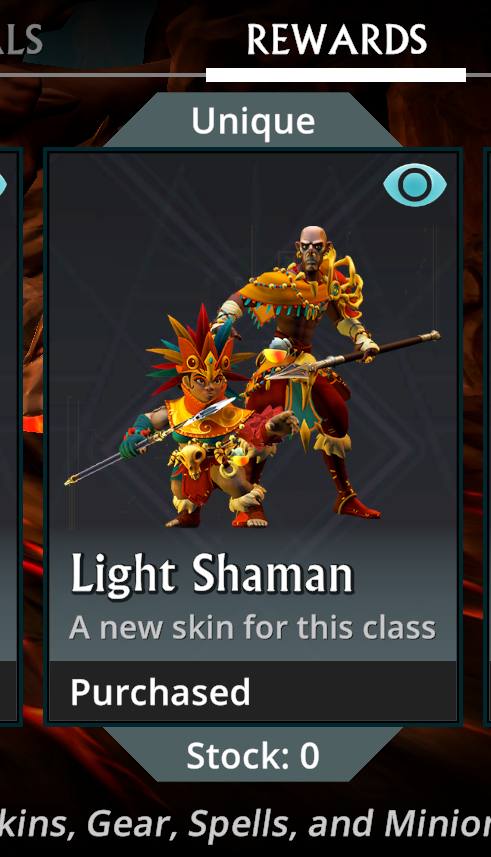 The unqie Shaman skin showed up as able to be purchased until Wednesday, then yesterday evening I noticed tthere were problems:

Please fix both issues, thank you very much!

Could you please send through a Support ticket, making sure to include your name code so we can quickly grab your account data!

Hello @Jeto - thank you very much for your help, I submitted a support ticket as suggested!

My issue with the Shaman skin as described above has not yet been fixed - it’s been almost two weeks since I submitted the ticket. I just sent an email soliciting help again to support.

Thanks in advance for any eventual assistance you can give with this. I spend money on the game and I want to be able to access all the features without issues.

I also have this same problem - Light Shaman shown as purchased, but I never purchased it, and I am not able to use or purchase it.

Wow, I see I’m not the only one with this problem - thanks for posting! Maybe they’ll fix it knowing it’s an issue for multiple players.
I wrote support about it and received the usual automated BOT reply that they would look into it, but Jeto is very helpful and I’m sure she’ll look into it and tell the devs there are a few of us with this same issue once she sees this thread…

I have updated my initial report and looks like we may have found the cause to this issue, just some further investigation happening.

Once we have a fix, I’ll update with an ETA on it.

is this ever going to be fixed? if not, I’d appreciate a flat out no.

Also, is there a cap on the number of characters that can earn gold? I have 7 characters and the last one made has progressed to Chapter 3 but is only getting 50 gold and nothing else for each battle in the main story line.

It’s a fabulous level 11 lizard (mercenarry) who kicks a** even at level 11 and is worth much more than 50 gold. LOL I have a paladin at the same level and with the same story progression receiving normal rewards, but my lizard is being gimped, and that won’t do.

Once you’ve played through a story piece with a class, more characters of that class only get gold from the same story piece.

Thank you very much for the information! In fact the lizard is my second mercenary, the only class I made two characters of.
How sad and somewhat disturbing that such a blatantly money-grabbing game then limits me in my gameplay in any way, shape or form - especially since I’m not free-playing.

I brought this up in another thread here:

Each class has two characters and two associated mana masteries. With this, players can theoretically build each character around one mastery or the other - for example, if a player has both the “lizard” and “cat” mercenaries, they can build one character around fire and the other around poison. This is particularly relevant now that we have available skins for both masteries. However, there’s a problem. While leveling up one character in story mode, players are rewarded with shards and gems af…

I think the rewards should be capped on a per-character basis instead of a per-class basis. I would love to play through as the other characters, but it’s kind of a waste of time if all you get is gold. Instead, each character should get full rewards the first time through

I couldn’t agree with you more. In fact, my lizard mercenary is built for poison, and my cat mercenary for fire - they are unique and I don’t really understand the logic behind allowing only one of the two to get drops and the other just a piddling amount of gold. I paid for the unlock for both chracters.

I have one of each class, plus the two mercenaries and another locked character slot ready for purchase…so uh…guess I won’t be buying it?
And not too interested in whatever eventual class might be released in the future at this point.

The team has a fix for the Skin issue and will be releasing with 1.3!