I got this screen when doing the first match of the first fight for the chapter 2 of this current season 1.4. The error happened right as I matched my red gems. I can now not login to the game due to the error popping up during the asset load of the game.
I am not in an area where I can

Hey, I’ve let the team know about this. They said it will resolve itself after 30~ minutes for you, I’m talking to them about what’s happening to prevent this bug in future as well.

Can you see the game version you’re on when you open the game?

Just recreated the bug, first kill of first fight seems to be the cause for me. Other functions of the game seem to work new season content seems like an issue for me lol.

Thanks for checking, it seems the team pushed a fix out for this last week before chapter 2 became available but obviously you don’t have it in your store if you redownloaded already.

Can I ask which region you’re in? ie. North America, Europe etc?

Lyranica experienced this issue as well this evening on Android. Same crash message, related to one of the new opponents in Chapter 2 failing to load (she showed me the error message on her phone and then the blank game board afterwards which then soft-crashed the game).

Can you ask Lyranica to reinstall then tell me which version the newly reinstalled version is on her loading screen?

Also checking to see if I encounter the issue on attempting the new story on Steam.

If you’re on version 1.4.0.22744 then you won’t have this issue. My main concern is why this version isn’t the one available in the GooglePlay Store for some players but seems fine for others.

Wondering if Lyranica was able to get this latest version or if it’s also missing from the store for her.

Looking at her phone now…

In her GPlay store, she did have an update pending. But, that update was not forced so it never downloaded to her phone (and she is bad about checking such things).

Updated her app and it is now on build 22744. Game redownloaded all of Season 1.4 automatically upon entering Season mode. Issue does appear to be resolved.

No issues with Steam.

The new opponent that was generating the error loads correctly. 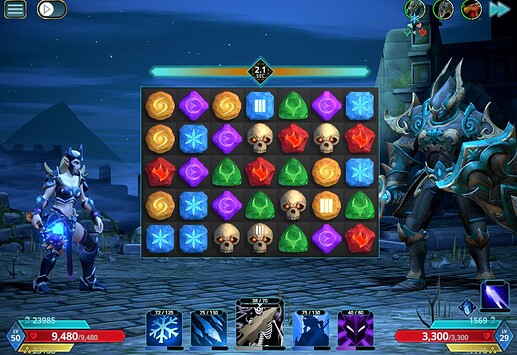 Basically, I’m hoping this is a weird anamoly for @lordofstorms2000 regarding the correct version not being in the store - I’m talking to the team now about how we can fix your game version for you and I’ll private message you once I have what you need.

I’ve also passed on the info you shared thanks Lyrian!

I had an update available that I was not aware of downloading now and will update. Seems I had it available but was not being notified that there was one.

The update did fix it just downloaded it.