I had spare ore and cash app was crafting with my level 50 Toragon. After my 8th serpentine pauldron in a row (all either red or uncommon) I’ve come to the conclusion that Toragon’s basic crafting ability appears to be bugged. This is far more than RNG. Can someone look into this?

Edit: others have also reported a large number of serpentine pauldrons dropping when crafting with Toragon. This isn’t bad luck.

Finally crafted a bone mask and then straight back to red serpentine pauldrons. Definitely not within the realm of RNG variability.

I got 2 uncommon bone masks in a row today
Given the number of pieces of gear, the number of sets, the various rarities - It’s probably just random chance…

But seriously, can someone please check (the seed?) for the pseudo random generator?

In this case, I think you were just really unlucky to continuously get Serpentine Pauldrons.

Heya, can you check more? I too only had way too many red serpentine shoulders. That seems unlikely.

Considering the whole pool of possible crafting Toragon has…

EDITED: Only 42 items, not 90 as every set only has a sub-set of the possible 6 armour items
Maths changes but point remains the same

So sure it can and will happen BUT its VERY unlikely

I think if the sample size was larger, say N>30 you could see a statistical deviation from the norm pretty easily

OR maybe its just random…

So out of another random 10, we have 2 Bone Masks and 3 Serpentine Pauldrons

The reality is that it can only be checked on the Dev side in a systematic way, on a large sample size, with the appropriate analysis - otherwise all we can say is it looks like it could be random, or not

Something that should be looked at: Toragon’s Craft Armor for Set ability: it says that the gear will be a random armor piece from the selected gear set and its element will be random as well. I feel like this implies that the quality of the gear will be at least Rare (as less than Rare does not have an element and an absence of an element to me is not a random element). However, uncommon gear is a frequent result in that selection. Given that its 250 gems and an Epic Relic to craft, a minimum of Rare quality should result.

Agree 100% with @Sibelios about the rarity issue. Also have to admit that I have been getting different items when I use him, not a bunch of dupes. So I’m not sure what’s going on there.

Then I ran out of resources to keep testing. Given Toragon’s huge pool, there’s no way I should have a distribution that looks like this.

18 pulls, 9 serpentine pauldrons, 2 bone masks, 3 dragonguard helms, 2 guard gloves. Statistics indicate this is well outside the realm of likely probability. Every single item I pulled that was rare or higher was red, as well.

As has been requested, please, on the dev side, do a couple hundred pulls with various characters and see what comes up. This, mathematically, did not appear to be properly random. I would test more but ore is hard to come by.

I agree 100% that RNG in this game is likely bugged. 75 ultimate caches from Season 1.3 and no Oberon’s Keybelt. I also don’t remember getting Resh crystal either. I feel like the RNG gets locked into place

Soulchaser yesterday - 8 bloodfang twinblade in a row!
4 red rare
1 red epic
3 uncommon
This is not RNG, this is the bug or some stupid system.

So, because I can accept a streak of maybe 2 or 3 in a run of 18 as very unlikely RNG, but I can’t swallow a run of 8, and pulling 9 out of 18, I asked some far more math savvy friends to help me with the probabilities of this.

Toragon has a pool of 42 items, not counting color or rarity. The chances of me pulling 9 serpentine pauldrons out of 18 pulls is about 9 in a trillion, or .00000000000009%, I believe. The chances of me pulling 8 in a row is even smaller, and having them all be red even smaller still. Now, add I’m the chance that I also pulled duplicates of other items, and we are well outside the statistical realm of RNG.

With a pool of 42 items, your chance of pulling any one item is 1/42, or roughly 2.4%. That means, statistically speaking, that you’ve got a 97.6% chance of pulling a different item than your previous one every pull. Math says you should never see a long run of the same item, and it’s very very very unlikely to see multiple duplicates in a small run, such as your run of 10 items with several duplicates. 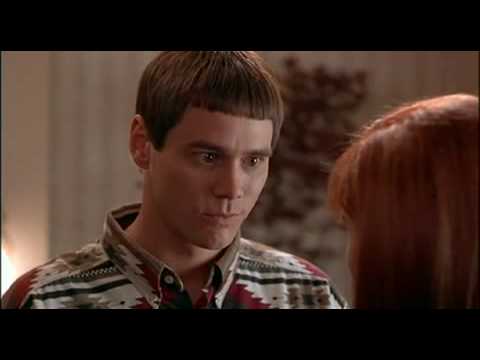 This actually hit a spot in my brain as very very rarely opening chests you get 3 x of the same item, spell, minion. Given the massive number of possible items that could be in the last 3 slots I’m not sure this should have happened as often as it has. 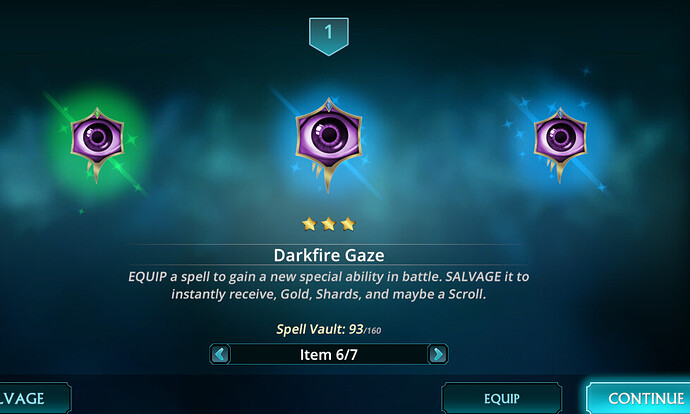 Been there, had that happen

I wanted to weigh in with a big +1 here. There is zero value in spending 250 gems and epic relics without having at least some guarantee that the item you’re getting is going to be at least rare (which the description and cost imply).

A player might be inclined to use this craft multiple times until they get the colour they are looking for (if they don’t have Toragon to L45 or L50).

As it stands, if you are in a situation where you want say, a Red Bloodfang Twinblade you can either:

a. Gamble all of your gems and epic relics and receive mostly common/uncommon items from this craft (as has been my experience)
b. Farm from the Chapter 15 dungeon, which given that dungeon chests have a habit of dropping absolutely everything except gear from the dungeon you’re running would take an eternity - including the frustration of upgrading common/uncommon items to rare only to get the wrong colour.

To help with following this up further, either as an investigation or to provide feedback.

Are the examples being provided of what you got from crafting, from using Toragon’s “Craft Armor Set”? Or Random Armor? 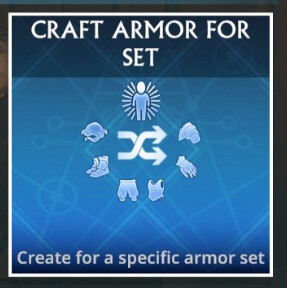 Also, if using the above, confirming you’re also selecting the Random option and not the specific gear slot - I can assume but want to make sure when I discuss this with the team.