Food is now even more useless

Food as a currency is now even more useless than before. Today in the kingdom bazaar (1 offer) and 5 daily deal resets (0 offers), I had a total of one offer for food, which cost 80 food.

Meanwhile, I have a maximum of 5000, with food “gained” naturally every hour, and lots of “rewards” are presented as food.

Good question. I’m keen to see the non-response to it

I will pass on the feedback and concerns regarding Food/Gold again to the team in our next meeting as well as the auto-play feature discussion.

it would be nice if we could actually get a real developer response about their approach to currencies. This topic has been “brought to the attention of the developer” numerous times. They need to respond to the issue. What is their plan regarding these dead currencies? Why are they taking up increasing space in chests when they have decreasing use?

Please let’s get some answers for a change, not just “we will pass it on”.

Honestly, how many times do the team need to be reminded about this?

What kind of game designers are you guys employing if something like this comes up regularly?

@Jeto Maybe food can be used for purchasing minions from Jocea? Kinda makes sense since animals eat food instead of ore, I presume, haha 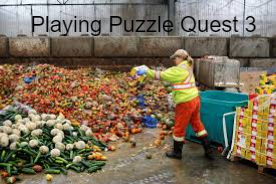 So today there was not a single bazaar deal for food. I also did 5 more resets (total of 6 daily deals) and every purchase was denominated in gold, gems and crowns.

On the first day of release of 1.2, there was also food, ore, and honor in our daily deals. These now no longer exist. Can you please confirm whether this is a „bug“ that we experienced or is this a feature which is no longer working as intended?

And back to food…. Seriously, what to even say? Its Game Dev 101 to not have useless currencies. The fact that we are even talking about this is truly sad. And after 6 months of discussions, it was made worse.

On the first day of release of 1.2, there was also food, ore, and honor in our daily deals. These now no longer exist.

Today our bazaar has 5x deals for gems, 1x for food IIRC and 2x VIP offers for coins. I don’t think our bazaar has had anything for ore yet. Looks like it varies all over the place.

I am referring to daily deals (solo, not bazaar). On day 1 of release ore denominations were possoble, but now it seems that has changed.

I think so far we’ve seen that the kingdom bazaar has had a least one deal right? but the daily deals, seems like the chance to see one of these newly priced deals is much lower.

I have not seen a single Daily Deal denominated in Ore/Food/Honor, only in the Kingdom Bazaar so the hope that Food might have some use there is pretty much dead.

Today we had a weapon glyph for 9000 food in our kingdom bazaar!