To win the the season elite modus I was forced to upgrade some gear to mythic.
With that done and reconfiguring some gear and spells I am now able as side effect to win a open tournament champion league battle by spell casting only (2500 points) under some conditions as it was normal in early access stage.
As a consequence of using this gear configuration actually more than 20 players would loose 250 gems until they find an adequate way to upgrade.

So should I do, wait or do not?
Let me hear your opinions.

So should I do, wait or do not?
Let me hear your opinions.

My view is the same back in early access; there is no benefit to doing this except perhaps to save yourself <1 second or more per match. The cost is a gem loss as you say to dozens of players.

It doesn’t affect your gem haul but it affects others so unless someone else is scoring 2500 and causing you a loss of gems you there is no advantage for you to score 2500.

Obviously no additional benefit to you for hitting 25,000, assuming no-one else is
Clearly detrimental to all other players in the bracket for anyone to hit 25000

Props to you for having such a power build!

I have been concentrating on spells, starting mana and mana regeneration and not so much on weapon.
At early access stage it was possible to get an endless spell casting without gem matching. Now it is only possible for a first turn because mana regeneration of elven charm was reduced drastically.
To charge the spells left me 2 offensive spells which is enough for most PvP but not for all. So I could reach 25000 because I only need 10 of the 77.

Coming back to weapon upgrade: I don’t say it is negligable. There is at least one enemy, Arboleth, which regenerates about 10000 points at lvl 100 for every spell casted and weapon is absolutely needed. But actually I can live with all my wepons on legendary 45.

This morning I only got 250 gems from the Open Tourney as rewards though I had 24750 total points. This means someone made a 2500 battle in the last hours or found a way to cheat.
Not sure what to do now.

I can confirm that there was no cheating, just like you being able to do a TO pvp round as described in the original post is not cheating. However, the player did not intend to do it and it was the result of using a setup for fast wins not expecting to get that result. They intend to avoid that situation going forward.

The reality is though that several items are not subject to the starting mana cap of 80% so until the developer fixes this, instances like this will continue to occur mostly by chance as peoples builds and stats make it more possible as you discovered as well.

Thanks for the Info.
The control of the mana cap should work. But it is not necessary to get near 80% starting mana. My build used 49%. Rest is done by other kind of gear and set bonusses.
If the 2500-result was got at the last day and last hours I cannot really believe it was not forced.

If the 2500-result was got at the last day and last hours I cannot really believe it was not forced.

I believe him, and I vouch for him. But I leave it up to you what you believe. Cheers.

The reality is though that several items are not subject to the starting mana cap of 80% so until the developer fixes this, instances like this will continue to occur mostly by chance as peoples builds and stats make it more possible as you discovered as well.

There’s a whole boatload of problems currently in play that have compounded since the Great T0 PvP Nerf that have ended up enabling T0 wins to be possible again, at least in the Open Tourney.

Rest is done by other kind of gear and set bonusses.

That’s one of the larger issues. The 80% cap currently applies only to pre-match mana generation (Citadel mana starting bonus + -pact gear bonus). Start-of-match mana generation abilities (set bonuses + specific gear bonuses ) completely circumvent the cap. And then, there’s the highly abusable Elven Charm after that for red and yellow builds which is still highly effective even after its nerf.

Another core issue appears to be that the team that designs new gear/spells did not talk to the team that designed the Great T0 PvP Nerf, because the same issues that were present in the pre-nerfed gear/spells have been reintroduced back into the game post-nerf. I’ll leave it at that in respect to those players who can pull off the appropriate builds.

Devs need to step in and nip this situation in the bud before it gets any worse, as the previous PvP mana nerf is becoming increasingly irrelevant.

To piggyback on this, what is odd is that the 80% cap on defensive stats persists despite the application of “start-of-match” effects so the fact that Starting Mana doesn’t is inconsistent. Seems like simple and logical fix that is just currently being overlooked by development.

@OminousGMan @Jeto This is feedback btw. I know things tend to get overlooked if its not in a bug report.

found a way to cheat.

So are you “cheating” now? 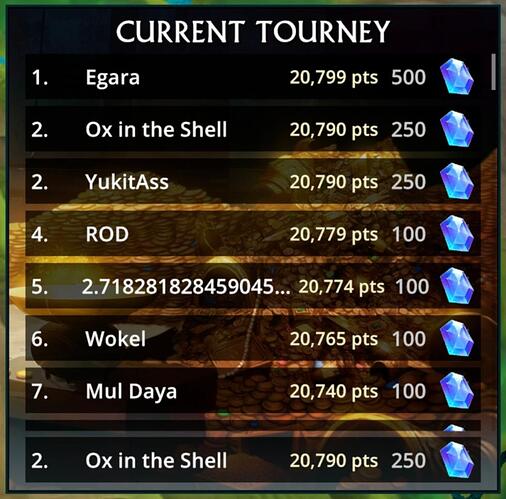 Obviously people can do what they want but it appears that the 24,750 “detente” is slipping. However, its still a choice at this point!

Not sure what to do now.

Hopefully, since it was one of the earlier streak scores it will fall off and we can continue on to 24,750 utopia. We shall see!

Hello Sibelios,
You are right. I used it at the lower percentages. At 150% I managed to stay on 2475 at max. Therefore no problem for others so far!

You are right. I used it at the lower percentages. At 150% I managed to stay on 2475 at max. Therefore no problem for others so far!

That’s what I figured. I appreciate you taking my humour as such. This is a frustrating issue that could be fixed by the developers so easily by actually limiting starting mana to 80% as it is supposed to be. But currently too many items supersede that cap resulting in the likely occurrence of more issues.

If my Guard Shield and my Guard Attributes, and the number of gems on the board with my Guard-I bonus can’t make my Block Chance exceed 80%, why do so many other items allow Starting Mana to exceed 80%? It’s inconsistent and should be fixed.

@Jeto @OminousGMan This is feedback by the way. I don’t know if feedback is actually acknowledged anymore but hey, what else can we do but shout into the black hole that is this forum.!

Your request to the devs seems reasonable, but …
Please also consider that any change / reduction of gear attributes will have a high influence on my gear which is optimised for mana generation and spell casting. On opposite to most of you I am not using royal set but any gear which allows pact values like dragonguard or jeweled. But this costs life, power and others. Another decision you have to make for citadel values: power versus starting mana.
Please also consider my citadel level which actually is 179. This should give some advantage!
In worst case I have to throw away most of my (legendary) gear. Who will compensate my cost?

i know, it sucks. I had all of my T0 gear rendered obsolete/useless when they ‘fixed’ this the first time. legendary rings, neck, head, etc. i’d love to have those resources back. So i’m currently stuck with trying to compete for T0 again and wasting resources that would otherwise go towards kingdom defense, or losing 250 gems/week.

Devs, please make this decision for me and either fix this or tell me it’s working as intended and it won’t be fixed.

A hard cap of 80% to Starting Mana will not limit anyone in their ability to do virtually any content. It’s the same hard cap that is applied to several other defense/utility stats. Asking for consistency will not harm your build. It simply prevents the very very high hurdle of doing Turn 0 PvP which is unattainable for months by most players. Again, you are not harmed by tying for first at 24,750. You gain nothing by achieving 25,000. You already have countless advantages over most players at your Citadel and Gear levels. I’m not sure why forcing other people to lose gems makes you feel like your investment was worth it?

Another decision you have to make for citadel values: power versus starting mana.

So if you have lots of starting mana options on your gear, then you can just choose Power. It costs 300 gems to change stats. So that’s not really an issue.

Please also consider my citadel level which actually is 179. This should give some advantage!
In worst case I have to throw away most of my (legendary) gear. Who will compensate my cost?

So anyone who played early access achieved XP gains at a much greater rate than anyone can now. In fairness, the only ones who should be compensated would be all those that started playing with XP nerfed. Shouldn’t they just be given lots of bonus XP to catch up?

I played a lot in EA. I invested in lots of gear like you did. Some of it has been rendered less useful (Looking at you Legendary Blue Dragonguard Helm! I see you 3 different colors of Legendary Dwarven Necklace!). Some stuff has become more powerful. That is the nature of these types of games.

To make this clear: I have no intention to make 2500 values and kick you others down.
Additionally I think you overestimate the danger coming from this. Since nerf on elven charm an endless spell casting is no longer possible. So I only can use the offense spells in my slots one times.
If your life plus resistance points are high enough I cannot beat you ( as well I need a good board related to opponent type).
One reason it works is that most people only care for increasing the weapon and dont care enough for resistance.
I personnally think the much better way now is to create a new ruby and lateron diamond league above champion league because too many people ( 54 last week I think) are now hitting the 24750 limit. So I have to fight against the real stronger ones.

To make this clear: I have no intention to make 2500 values and kick you others down. 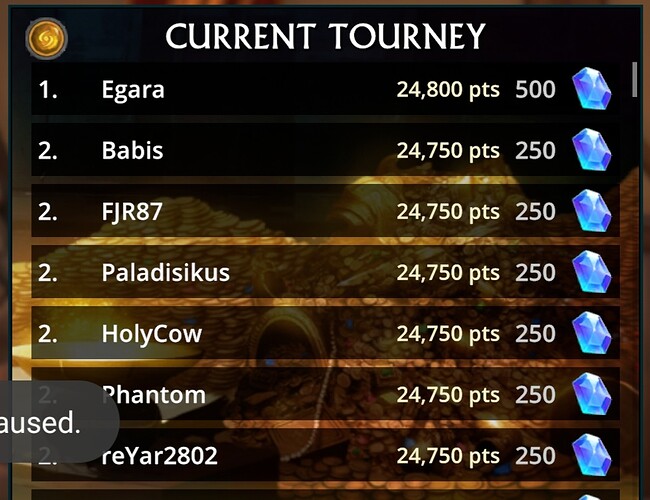 One reason it works is that most people only care for increasing the weapon and dont care enough for resistance.

The main reason that this works is because you make a choice to equip yourself for Turn 0 casting and then you cast the spells before taking a gem matching move and then you win. That is your intention. You could just simply take a quick move and then cast all the same spells.

Obviously you have the right to do what you want, but you made a big deal about someone accidentally doing this, so you choosing to do this feels a bit awkward.