This post made me realize that dungeon 3 is a common place for this bug to occur. Here’s what I think is really happening, this worked on my first try testing it.

First, have a troll use his Stench spell, and he must reduce your resistance to 0. This spell seems to be tied to a number of bugs.

After losing your resistance to the Stench spell, I believe that the next damaging ability will kill you even if your barrier is up.

This, and barriers not working while affected by Terror, probably accounts for most if not all cases where you can die with a barrier up.

This (troll stench), and barriers not working while affected by Terror, probably accounts for most if not all cases where you can die with a barrier up.

Omg, your powers of deduction are awesome. If this is the case, you deserve the interwebs award points for the day and the dev team should be giving you a non employee bonus.

@Jeto I did some testing based on what @Traductus posted above. Here is what I have observed…

I should mention that I was using difficulty X dungeon. And difficulty X skirmish. In all cases the resistance was removed by the troll stench.

I believe this has been hard to reproduce because of the current game balance. There are very few ways to get to zero resistance and still be alive. I could not even find a way to test what happens if you are just missing part of your resistance bar. In the current state of the game, anything that I can survive a spell hit from, just dies from me giving it a sideways glance.

If anyone can find a way to test some other method of getting resistance to 0, other than the troll, we could figure out if it is specifically the troll or just 0 resistance, in generally, that is causing this.

It looks like 0 resistance is the issue. It shouldn’t be. Terror IS supposed to cut your barrier in half. But your resistance (if full) is unaffected if hit by a spell with barrier up. It shouldn’t behave differently just because its zero.

In this test, I was running the third dungeon on Difficulty I. The tooltip says that Poison Stench does 4,761 damage, but in-game it said that the spell did 5,056 damage, which unfortunately I don’t have a screenshot for. You’ll just have to take my word for it

So the troll has done 5,056 damage to me via Poison Stench. This appears to only have affected my Resistance, I still have full HP. Later, the Troll uses his Poison Rake ability which would normally kill me, but I have a barrier up so I should take no damage. When he uses the spell, in-game it says the spell does 0 damage. However, my health drops to 1,433.

So I believe that whatever programming is in place to prevent Poison Stench’s damage from affecting HP is undone by the next damage spell cast by an enemy, even if you have a barrier up. At high levels of difficulty, this gives the impression that enemies are killing you with their abilities when your barrier is up, when really you’re just receiving the extra damage from Poison Stench that exceeds your Resistance.

I don’t have any screencaps to prove, but I recall being killed by a regular attack with barrier up without any debuffs.

I hadn’t thought about whether a regular attack could trigger the bugged extra damage from Troll Stench (I seriously thought the spell was called Poison Stench for the longest time).

So once again I did a Difficulty I dungeon and got hit with a Troll Stench. This time the game says the spell did 4,771 damage for whatever reason.

Then I took a regular hit with a barrier up. 0 damage, no lost HP, and I lost my barrier, all expected and normal results.

Then I got a new barrier, got hit by Poison Rake, the game says I took 0 damage, but my HP has vanished.

This may, or may not, be fixed by the Troll Stench bug being fixed (reported in another thread).

Atm, Troll Stench gives you Negative resistance if it exceeds your resistance - check your in-game stats for giggles

Atm, Troll Stench gives you Negative resistance if it exceeds your resistance - check your in-game stats for giggles

I was just coming back to bring this up!

I just did some more testing, and noticed the negative resistance stat. So I set up my paladin with some gimpy spells and went into Difficulty I. I let the troll stench get me and kept my barrier up and let the troll hit me with poison rake. 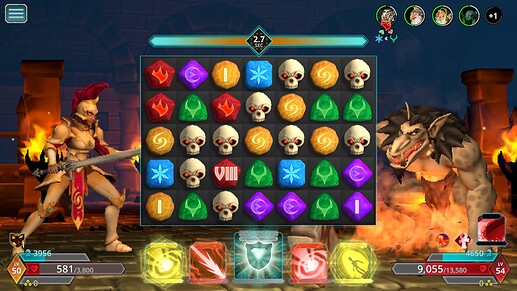 Once my resistance went to 0, my barrier worked fine. So I think we have reason to be optimistic that if they fix that negative resistance it will clear this up!

Someone up-thread mentioned terror halving your barrier. What should this mean, practically? In my experience, every time I’ve had both barrier and terror active, the barrier has remained intact and I’ve taken full damage. For a sample size large enough that I feel I would’ve seen any deviations.

My expectation is that a halved barrier means that 50% of the time, it blocks all the damage and drops, and 50% of the time it does nothing and stays up. But that’s definitely not what happens.

Thank you for all the extra information you’ve provided, it’s defiantly helped give us more insight into this issue and the circumstances in which you’re all experiencing it. We’re still unable to reproduce this on are end but we are still investigating it, I just wanted to provide a quick update for you on our side.

Thanks again for all the help, it’s much appreciated.

We’re still unable to reproduce this on are end but we are still investigating it, I just wanted to provide a quick update for you on our side.

Thank you for staying engaged on this. I just wanted to say that it is difficult to reproduce because of the conditions needed and the current state of game balance. But if you can reproduce the conditions, it happens every single time.

You need to first be hit with Troll stench. This creates the negative resistance value. Then you need to stay alive and have a barrier up and then let another enemy cast a damage dealing spell on you (again with the barrier on.) If you satisfy those conditions then that second enemy spell will do damage to your health in the exact amount of the negative resistance value from after the troll stench.

Screen shot shows you have barrier but it also shows 2 stacks of terror. Terror causes barrier to only be 50% effective, so damage will be applied through your barrier if you have terror on you.

@Tresk - Ah, I didn’t realise that. Thanks for the info! Guess I should read the effects details more frequently

Had this happen to me for the 1st time after 100s of hours of gameplay.