Before the 0.36 update, I believe I saw my Paladin’s barrier absorbing a death dive, but just now, I got killed.

I’ve only experienced this once, but it may take some time to hit the same scenario again.

Did you have the Terror debuff? Supposedly that halves beneficial effects including Barrier, although for a while it was bugged and didn’t actually work.

It happened to me today as well. No debunks. It happened on the gold dragon. I believe the dragons spell does multiple looping damage, not all at once so the barrier blocks the initial damage and then you die to the secondary damage

Funny thing is, I spent gems to revive, and my barrier was still active, and it absorbed the next attack.

I just had roughly this happen.

I was doing a difficulty X dungeon run of dungeon 3. I had a barrier up and I don’t believe I had any debuffs. Lardak or whatever his name is used Earthfire on me and killed me. My barrier was still there on the death screen.

I had this exact issue happen to me in a co-op run the other day. I had barrier up, no debuffs, enemy mob hit me and I died. When I respawned my barrier was still active and blocked the next hit properly.

I have seen this a few times. First time I thought I’d mistaken the fact that I had a barrier up. Then it happened again. Has happened three times now to my knowledge.

Just after some more information for this one, specifically the enemy you were facing.

I did attempt to reproduce this against Lardark and the Gold Dragon.

Initially I thought Lardark had done damage through my barrier, but upon slowing down the replay it did block the initial damage. And as the next turn begins almost instantly after, I then took the burn damage for the next turn.

As for Gold Dragon, it didn’t have a spell that does repeated damage. Spells tested against were Lightning Breath, Dragon Bite and Radiant Roar. Where all damage was blocked.

I wasn’t able to then test being killed while Barrier is up, to see if when revived it was still active.

Death Dive is the name of the Griffon’s first ability. I also have died to it while my barrier was active.

Another ability that killed me while barrier was up is Poison Rake, the Troll’s second ability.

I died to a troll, not sure what power, but I think it was their mega damage attack. It’s an intermittent bug, so isn’t reproducible on demand. 98% of the time barrier works, until it doesn’t.

Sorry I missed the Griffon, I had tried against this as well. Took 0 Damage.

And following up with the Troll (both abilities) 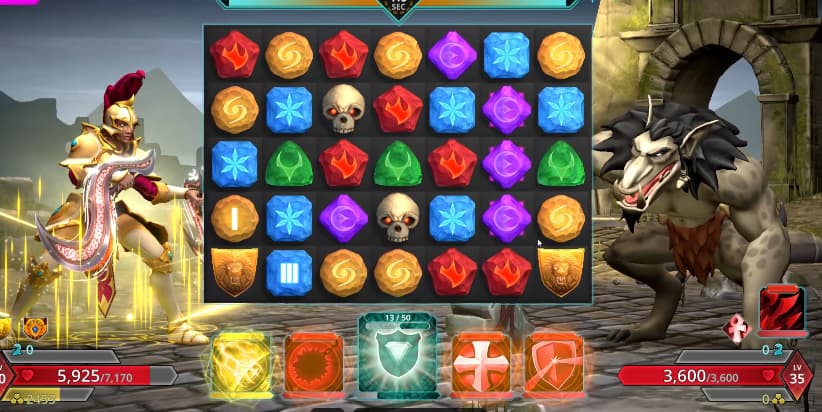 At this stage I am still unable to reproduce this, but will change this to investigating. If anyone is able to capture it in a video, that would also be super helpful!

Hi Jeto. Death dive and Lightning breath were two that got me. Both opponents were at level 90+ (can’t remeber exactly). I’ve survived many of the same attacks before and since, with the same setup, so it’s something obscure. Good luck trying to replicate it

I wasn’t able to then test being killed while Barrier is up, to see if when revived it was still active.

I think I can shed some light on this subject.

Barrier-on-Hit effects (Savior Shield for players) rolls on each incoming hit, regardless of the result of that hit or if barrier is already up.

As all of this, outside of the revive confirmation and acceptance is a near-instantaneous effect, the player may not ever notice that barrier dropped for a split-second.

Note: The barrier activation upon death is observable by watching to see to see if a Griffon’s Royal Armor effect activates upon it receiving a fatal blow. The effect activation is somewhat rare (Royal Armor has only a 10% activation chance), but easily observable when the effect does activate on the defeated griffon (and then the game moves on the next opponent).

This never happened. I never revive. Unless you are referring to some auto revive that I don’t know about!

I don’t use Savior’s Shield. I don’t play Paladin either. My barrier comes from Dwarven Necklace.

I play paladin, don’t play savior’s shield, only way I get barrier is by casting it or using the effect from dwarven necklace, which can’t happen during the enemy turn.

I think a more accurate picture of what’s happening is that the code has a race condition in it somewhere, and it’s handing out fatal damage, very rarely, before it gets to check if barrier is up. Thus barrier stays up, for those of us who are playing in a party and auto revive, or pay to revive, because the code never applied the fatal damage to it.

I have never had this happen except for when I’ve had terror debuff on me. I’m not saying this to assume it’s impossible. But I’m saying it because there is likely a bunch of things that need to be in place for this to happen. This will make it hard to track down.

If this happens frequently, I’d considering video for your fights to hope to catch it.

If this happens frequently, I’d considering video for your fights to hope to catch it.

It’s definitely not common. I’ve had it happen three times and the last time was about a week ago. Since then I bet I’ve done 50+ level 90+ dungeons and not had a recurrence! As soon as I stop watching for it, it will happen again

For me it’s irritating but not a game changer!

As for Gold Dragon, it didn’t have a spell that does repeated damage. Spells tested against were Lightning Breath, Dragon Bite and Radiant Roar. Where all damage was blocked.

I had this (fatal damage with barrier up) happen twice today, in the past hour.

The first time was a griffon in Dragonrest temple. I didn’t get a video because I didn’t expect something weird to happen. I restarted the dungeon and took video on the griffon and of course this time everything went the way it is supposed to go.

. So I killed the video and continued on.

Then the gold dragon at the end killed me through barrier with the lightening breath.

Meanwhile… I do this dungeon all of the time (waiting for the slot machine to kick me a red helm) and this never ever happens to me. So the moral of the story is that it’s highly unlikely you will get someone with video for this. Someone on the team is probably going to have to play it over and over until it happens.