Many of you would have noticed that we’ve been taking steps through updates and new features to drive towards what we feel is a more authentically Puzzle Quest experience. This probably the biggest change we’ve made to the game since launch.

We’ve introduced a new way to play Puzzle Quest 3 – through the use of Action Points!

It’s been in the works in the background for quite sometime and has quickly become our favourite way to play!

This will be the default option for new players to enjoy the game, without the pressure of the timer.

Players will be able to swap between Timer or Action Points through the General tab of the settings menu. If you’re already in a battle, the setting will take effect in the next battle. 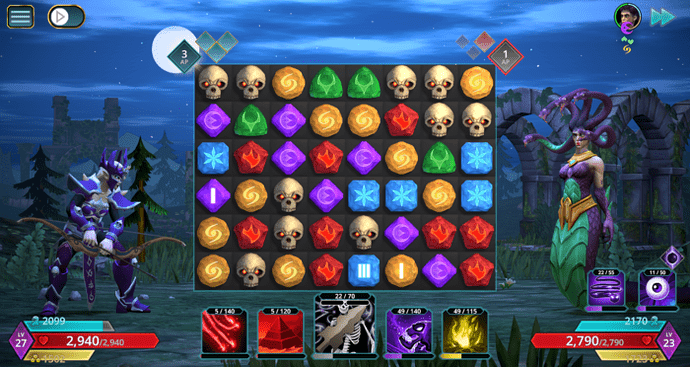 The way enemies generated mana currently we felt was counterintuitive. They would generate more mana the better you did – and it wasn’t communicated very clearly.

As such, with the introduction of Action Points, an enemy will also take advantage of this.

The number of enemies in a battle has been reduced to one in a regular battle, and up to 3 in Dungeon Battles.

In order to provide a more unique and interesting experience in Versus, Enemy Heroes don’t behave quite like other enemies like they do in previous updates. Unlike regular enemies, enemy Heroes in Versus do require Skull matches to attack. However, they can also cast their spells without ending their turn.

With the inclusion of the Action Points mode, we didn’t want to completely limit later gameplay to just three moves.

As such, Heroes will now increase their Speed stat as they Level. This will lead to an increase in time to match in Timer mode, as well as an extra AP at level 40.

With the addition of the Action Points gameplay mode, as well as the natural Speed increase in Hero stats, we’ve reduced the amount of extra time received from subsequent matches back to its original value of 0.2s.

Continuing to ensure that Timer Mode and Action Points are evenly balanced is an ongoing priority for us. We’ve tested internally extensively, but it’s also important that we get feedback from you folks in our community!

Will that healing be affected by Healing Boost stat?

The enemy will continue to attack each turn, even if they don’t match skulls. However when matching skulls, they don’t receive a bonus to their attack.

I am tentatively excited at this shake up!

But… I think the enemy is going to steal all the big gems I make! We shall see…

What if I make 2 columns on the same turn? Do I get healing for each column?
What if I fill the whole board with same color gems, does this count as 8 columns?

Yes, for each column matched it will trigger. So a full board state once matched, will give the bonus for each column. Currently, there is no limit on how many columns can be matched for this bonus.

Switching to this Action Point game mode, what happens with the gear that give bonus time (Royal boots, Runic boots)? Will they give useful action point bonuses, or will they be obsolete?

What happens if the opponent matches the full row? Can they stun the player and force them to miss a turn?

And something else: spells that destroy columns (lightning bolt) will now also heal armor and resistance? I may be tempted to change spells…

And something else: spells that destroy columns (lightning bolt) will now also heal armor and resistance? I may be tempted to change spells…

I’m not sure that it does. I believe the wording was:

Destroying a column via spell is not the same as making a full column match of identical gems.

Switching to this Action Point game mode, what happens with the gear that give bonus time (Royal boots, Runic boots)? Will they give useful action point bonuses, or will they be obsolete?

Increase your Speed, increase your action points. Also, it sounds like your base speed will increase as you level:

Heroes will now increase their Speed stat as they Level. This will lead to an increase in time to match in Timer mode, as well as an extra AP at level 40.

So by the time you hit level 40, are they saying that you have 150 speed? I’m not entirely sure.

I’m a little confused about a few things. Hopefully, you can clarify some.

Does that mean the enemy will do chip damage to us if they don’t match skulls? Or does it mean they will just do X amount of damage whether they match color gems or skull gems. Based on removing our chip damage, I assume it’s the later. But it’s not really clear. So I thought I’d ask.

The number of enemies in a battle has been reduced to one in a regular battle, and up to 3 in Dungeon Battles.

Going to answer a few things all at once;

their mana is now generated by matches they make, rather than your own matches.

Can you confirm their rate of mana gain? Is it using the old formula such that any gems count towards their mana gain at a default rate of 2 mana per gem (subject to modifiers) regardless of gem color/type, or do they actually have to match gems of their spell color and their mana gain rate is therefore increased to compensate?

Mana gain rate for enemies is the same as the player - 10* mana per gem split across their spells. They need to match the spell’s color in order to power the spells.

Interesting move this long after launch.

In this case, it seems like the third spell (killing blow) of the kingdom defense dragon will be charged pretty quickly.

Will the mana cost for the killing blow increase? Or is the dragon forced to use its 3 spells one by one?

Where is my popcorn meme? I think this needs that.