What were you expecting to happen, and what actually happened
DungeonMaster Bounty indicates that credit is awarded for completing Dungeons at Normal Difficulty or higher. 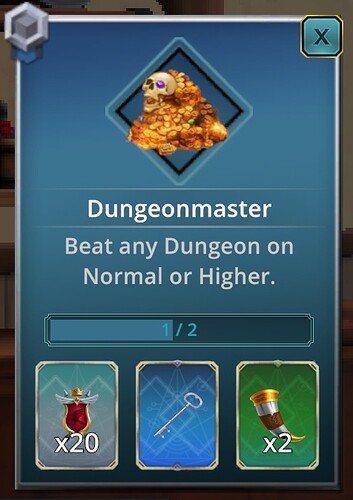 However after testing multiple normal Dungeons, that is not the case. Credit is only given based on my observations by completing Hard or higher

How often does this happen? When did it begin happening?
Always since the 0.36 Update

Steps to make it happen again
See above

They got rid of the ‘Easy’ setting, so now ‘Normal’ is the lowest difficulty setting. Looks like they forgot to correct some text, but working as intended.

Is it working as intended though? That would mean any newer player is effectively prohibited from choosing that as a Bounty. It seems that the correct intent is that Normals should satisfy the condition as stated.

I believe so, as before the update I was locked out of those bounties because they were too difficult.

But you could choose to go do a very low level normal dungeon and it scaled further down. From my perspective its a coding mistake. When they intro’d “Easy” they made it the “first” mode and then solved the Bounty issue by excluding the “first” mode. Once they removed the Easy mode from the table, the bounty is now pointing to normal to exclude.

It’s a combination of a naming issue and fixing the “bug” where Easy dungeons in 0.35 completed the “Beat at Normal or Higher” dungeon bounty requirement.

All that needs to be fixed is to change the bounty text to say “Beat any Dungeon at Hard or Higher” to be compliant with the difficulty vernacular used in 0.36.

All that needs to be fixed is to change the bounty text to say “Beat any Dungeon at Hard or Higher” to be compliant with the difficulty vernacular used in 0.36.

My point is still the same: Given all the changes to the new level of difficulty introduced, leaving it at Hard+ means that the bounty is effectively eliminated as an option for players for a significant period of time. I realize there are other options but this seems to be rather regressive.

You’re not wrong. Hard is going to be out of reach for much of the playerbase for a considerable amount of time.

Also it doesn’t matter as you like to gleefully point out. They will do what they want. It’s a bug, no further comment from you is needed.

Still Happening, no response yet

The challenge dungeons don’t count either

No response to this bug report either. Still happening. Every day.

Yup, still happening to me as well.

Hey! I shared this in the main .36 announcement thread, but wanted to post in here too. We are collecting all your feedback regularly and looking into player bug reports. While we aren’t posting a response in every thread that pops up, or every day, please know that we are actively checking the forums and passing on what is being discussed. Jeto - Support Human

Another bug with several confirmations. Hopefully this one warrants investigation.

It appears the text has been updated, with the Dungeonmaster Bounty now only displaying “…on Hard or Higher”, which appears to have been reported previously. 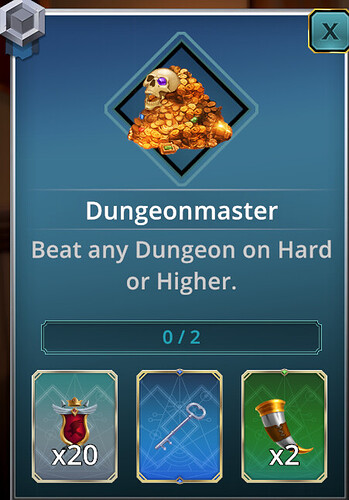 But I have created a new report in regards to @LittleWombat mentioning that the Challenge Dungeons are indeed not progressing the Bounty.