The latest flash offer to buy 3 glyphs of your choice for 1800 crowns is not working. I am trying to choose 3 armor glyphs.

**Platform, device version and operating system I am on iOS, iphone and iPad

**How often does this happen? When did it begin happening? It has happened since the offer went live.

*Was this a once-off bug or has it been a consistent issue? Does it only happen after doinga particular game mode? Every time I try to buy it it does same thing 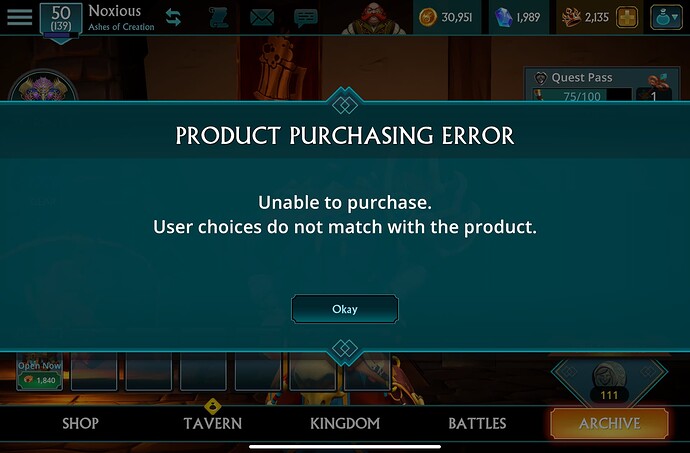 Thank you for pointing this out! 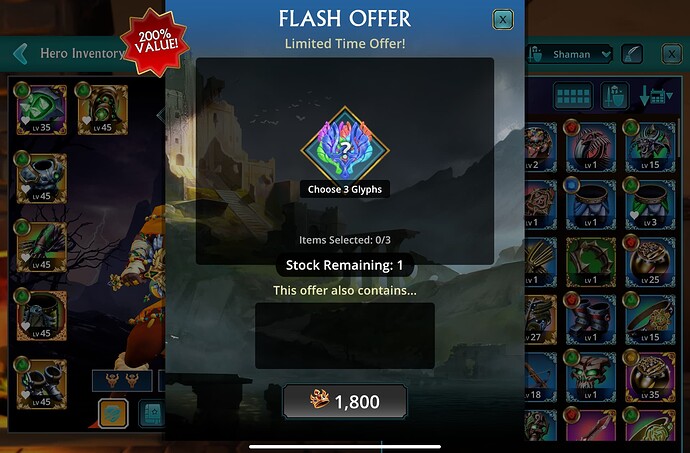 Had the same problem on iOS on iPad.

I tried it on steam too and same thing happened.

Had a guildmate report the same issue. I think the Flash Offer simply didn’t work at all.

I’m guessing the offer crashed because for whatever reason, only 3 of the 5 types of Glyphs were being offered to the player when the offer likely should have been for all 5 types of Glyphs (deal did not mention that the purchase was for restricted Glyph types).

I grabbed this one first thing this morning and will cross post in the most recent thread as well.

@jeto any chance we can find out if we are going to get these offers again? I spent 30.00 on crowns in good faith that I could buy this offer and I don’t think its fair that I wont get too. I do not want to spend those crowns on anything else because I bought them in good faith that your offer would work or I would not have spent the money.

I have passed on to the team to see if those flash offers can be cycled back through again.

Once I get an answer back, I’ll update this post or just add a comment to this thread.

Thank you it is much appreciated!

I can’t believe such an easy decision takes so long. Could imagine many players have spent some real money to profit from this nice deal.

For now “feeling screwed” would be my personal choice to describe the situation. Or should I say taking our money is okay without fulfilling the “offered contract”?

Dear Infinity plus 2 and 505 games. Do I need to get consumer affairs involved?

An explanation of misleading or deceptive conduct in relation to products and services.

It’s been over a week since we have heard anything back from your company about this. We gave you money on the promise of this promotion. I will be taking action if the silence continues

Could we have an update on this and the Tier 4 relic offer that had the same issue please?

Has there been any confirmation that these offers will be available again soon? If that’s not possible, is there any way you could gift the items to those of us who tried to purchase, and deduct the crowns from our account? 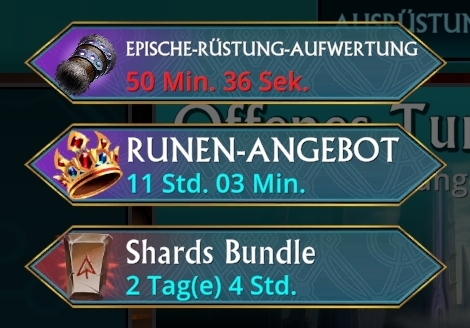 Just to make it clear - no, No and NO! - compared to what was offered before

Dear Infinity plus 2 and 505 games. Do I need to get consumer affairs involved?

It’s been over a week since we have heard anything back from your company about this. We gave you money on the promise of this promotion. I will be taking action if the silence continues

@Melon Let me know if you’re going to go this route - I can add some additional information related to misleading/deceptive conduct related to paid Steam DLC items (Serpentine Flame Ring & Jeweled Golden Grasp). Also, I’m increasingly concerned about the RNG in this game, whether the advertised chances for seasonal legendary loot are consistent with the actual chances for seasonal legendary loot.

Please note we have not cycled the missed flash offers yet, when we are doing it or have more information we will update this thread to let everyone know.

Jeto, I know you’re limited in what you can say because it has to go through the layer of vampires that control your speech.

But this response, I can’t accept such a non-answer. Does your company just expect us to just wait in the dark even more?? I’d love to sit in on your meetings and listen to the bullshit excuses to why the fuck would anyone give you guys more money after this stunt.

I have never dealt with a game company so brazen and blasé with trying to fleece their playerbase before. Actually, my memory has holes in it, these actions definitely remind me of Scopely. Such esteemed company.

You know, my mates give me shit for playing this game now still, I’m actually embarrassed to have it open around them. In early access I asked a bunch of them to play together with me since we all played puzzle quest on the DS and PSP back in the day and recognised how good it was.

They’ve all left precisely because they smelled this company’s bullshit and incompetence from a mile away. They even hang shit on me for still stubbornly sticking around for nearly 2 years now playing and trying to give your team the (now very undeserved) benefit of the doubt, but this action could be the straw that finally breaks the camels back.

Come back with something else other than nothing for your paying player base. Make it right for us.

Please note we have not cycled the missed flash offers yet

This is not a good response from the developer (I realize you, @Jeto, are just passing on the message). The developer has full control over how deals are “cycled”. They are not bound by any rules about what offers they want to make other than their own. Perhaps they have a “cycle” that they feel bests achieves sales, or impressions or whatever. But that should have nothing to do with making the offers that encouraged people to buy crowns available once again since the offers were defective to begin with.

This would be the equivalent of a store running a promotion and says “In order to buy these nicely discounted items, you first have to deposit money with us for gift cards” but then when you attempt to use the gift cards, they tell you that the system is down on the day the offers are available. It’s a bait-and-switch even if it was by technological glitch (the offers weren’t working properly on the days they were offered and the staff were on holiday). As soon as the issue was assessed upon staff returning (nearly two weeks ago), the offers should have been announced and then seeded a few days later. That would be the end of the issue and then you would have placated customers.

Instead, some number of individuals were induced to buy crowns as much as 3 weeks ago and have been given no word of when they can utilize the currency they were forced to exchange for in order to conduct the transaction (if the offers were denominated in currency instead of crowns then the issue would have been moot since no one would have been able to purchase the glitched offers).

The developer should take this very seriously and remedy the situation in short order.

Why is it taking so long to resolve this? What exactly is the problem? The longer this goes on, the more good will you’re losing from your paying customers. The offers induced people to spend actual money on crowns, and now that the developers have that money they seem to have zero interest in actually giving us what we paid for. This really sucks.

When will you be reinstating the offers? Have you actually had any confirmation that these offers will definitely be reinstated? Or do the developers not care?